Nepal is not a large emitter of greenhouse gases; however, it is ranked 4th in the world in terms of vulnerability to climate change. Working people are badly impacted by the erratic and extreme weather conditions which are changing every year for the worse. There is a challenge for trade unions to relate climate change as a priority agenda for workers in Nepal. This article describes the process of developing an understanding of how climate change impacts workers by engaging with trade unions, government, academics and relevant stakeholders. 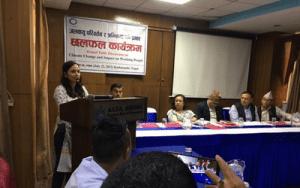 Climate disasters like heavy rains, landslides, floods, snowstorms, avalanches, dust storms have become more frequent in the Himalayan nation of Nepal. Tourism workers in the trekking and mountaineer centres such as Pokhara watch as glaciers melt before their eyes as a changing climate wreaks havoc on their industry.

Nepal is highly vulnerable to climate change impacts, and recent studies by the Asian Development Bank suggest Nepal faces losing 2.2% of its annual GDP due to climate change by 2050. The country is at high-risk due to its fragile topography, the climate-sensitive livelihoods of the population, and their limited adaptive capacity.  Official government records indicate that 1971-2007, 27,000 people have been killed in Nepal due to natural disasters and five million people are impacted. The actual figures could be far greater due to the inability to collect data accurately from some regions.

Who are most impacted by climate change in Nepal?

Nepal is not a big emitter of greenhouse gases; however, it bears the brunt of the climate crisis disproportionately. A study done by APHEDA’s partner organisation in Nepal, the Centre for Labour and Social Studies (CLASS), shows that there are seven sectors which are most vulnerable.

Workers in these seven sectors experience the burden of climate change impact. These workers include tourism and mountaineering workers, city waste collectors and cleaners, health care workers, agriculture workers, hydropower and energy sector workers, migrant workers, construction, and transport workers. The report notes that informal work which is mostly done by women workers, including street vendors and daily wage earners, are most impacted by the rain, heat, and fossil fuel pollution. The change in temperature and weather patterns have resulted in increased workplace hazards, injuries and in some cases deaths.

Secondary impacts such as the rising cost of food and spread of diseases are making life more difficult for many workers. For example, diseases have spread to areas which have previously not been impacted. This means dengue fever and malaria can be found in higher altitudes due to the rise in temperatures. Another disease spread by sandflies is also on the rise in Nepal because of increasing temperatures. Street vendors and outdoor workers are most vulnerable to these diseases.

CLASS Nepal consulted trade unions, governments, workers, businesses, and academics on their understanding of the climate change impact in their workplaces. They were interviewed before and after the collection of data. They organised 3 rounds of focus group discussions and a final roundtable discussion where 118 trade union leaders and other stakeholders participated, including 38 women (32%).

A major finding is that of the 118 respondents taking part in the study, 52% had no idea of the climate change impact in their sector at the start of the study. However, after the focus group and roundtable discussions, the same group were again asked the same question, and all of them were able to respond to the question. There is consensus among the participants that climate change is having a major impact on the Nepalese economy, employment, food, water and energy security.

The tourism sector is the fourth largest employment sector in Nepal. Mountain guides such as Sherpas and mountain helicopter rescue team are on the frontlines of a warming climate. The impact on their work includes rising snowlines, unseasonal melting of snow and ice and extreme storms occurring during “safe”” mountaineering periods. This is exposing workers to increased risks including death. For example, on 18th April 2014, 16 Sherpas were killed and many more injured in the Khumbu icefall while they were clearing a path for tourists to climb Mount Everest.

The study found that every workplace will be impacted – from street vendors to white collar workers – due to the increase in temperatures and other natural disasters. There is a demand from the roundtable discussion to make climate change a workplace issue and address it as a workplace risk. There is also a specific proposal from the trade unions to take up climate change as a priority issue which directly affects workers in the upcoming national election on 20 November this year.