On Friday 7 May 2021, two hundred APHEDA supporters, internationalists, unionists,Timorese seasonal workers and punk rock music aficionados came together at the MUA auditorium in Melbourne for the Painters and Dockers Solidarity Concert for Timor Leste. The event raised over $8,000 for APHEDA’s partner organisations in Timor Leste who are rebuilding their lives and livelihoods after the Easter Sunday floods which devastated Timor during one of the worst outbreaks of COVID-19.

Dock on! Solid line up for Timor Leste!

Dockers’ frontman, Paulie Stewart did not disappoint. He lined up two incredible support acts – Ghetto Stars and Aaron Darcy – to get the night off to a rocking and hip-hopping start. Front singer of the Ghetto Stars, G-Storm (who was born in a refugee camp in Burundi where he started drumming classes at the age of only six) has been mentored and managed by Paulie Stewart since 2010, gaining a huge national following including recognition from top Australian artists such as Paul Kelly, Xavier Rudd, Angie Hart, Dan Sultan, Bliss & Esso and more. The Ghetto Stars trio includes new Sudanese rappers Lily K and Bochine and they had the whole room jumping to their fresh sounds. 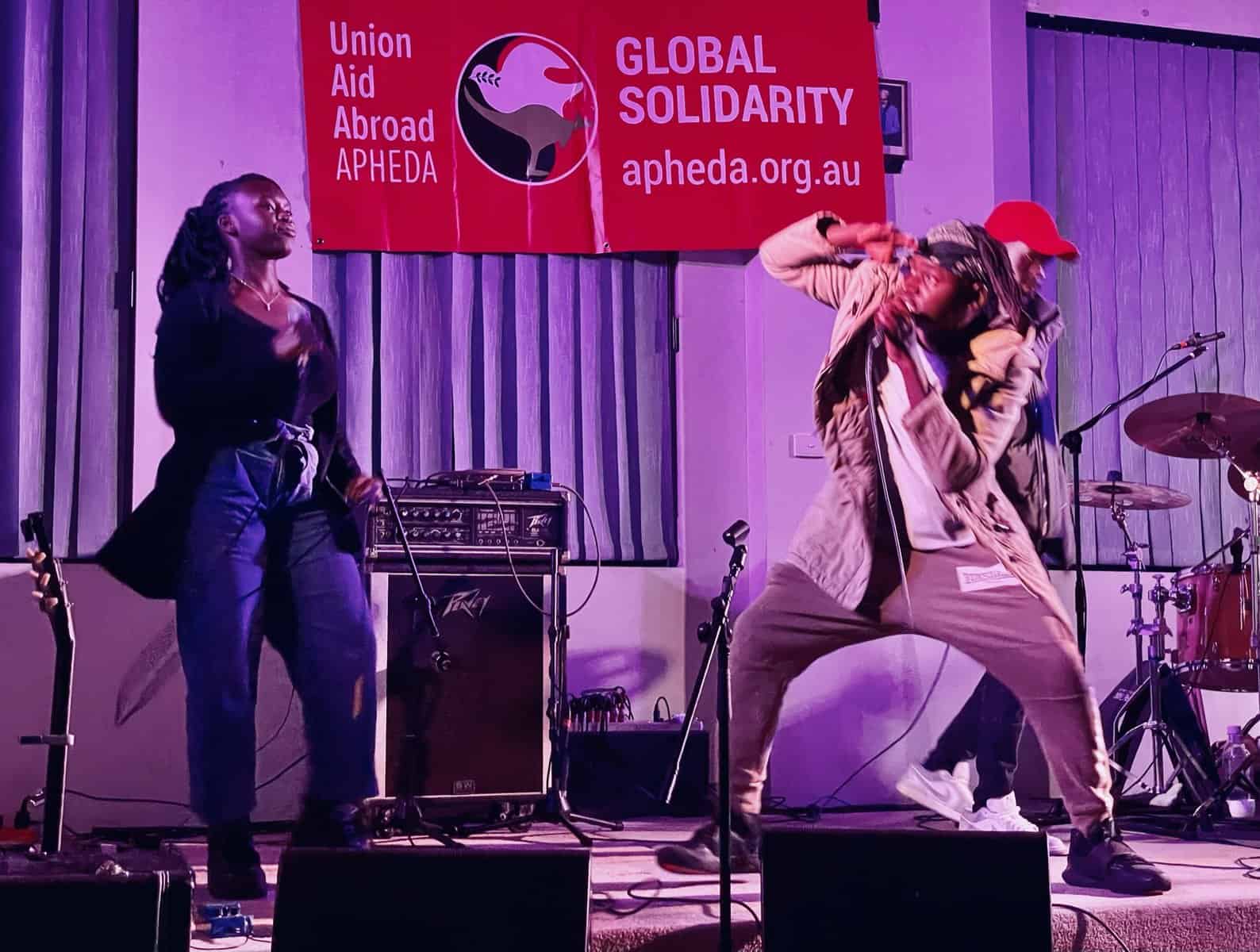 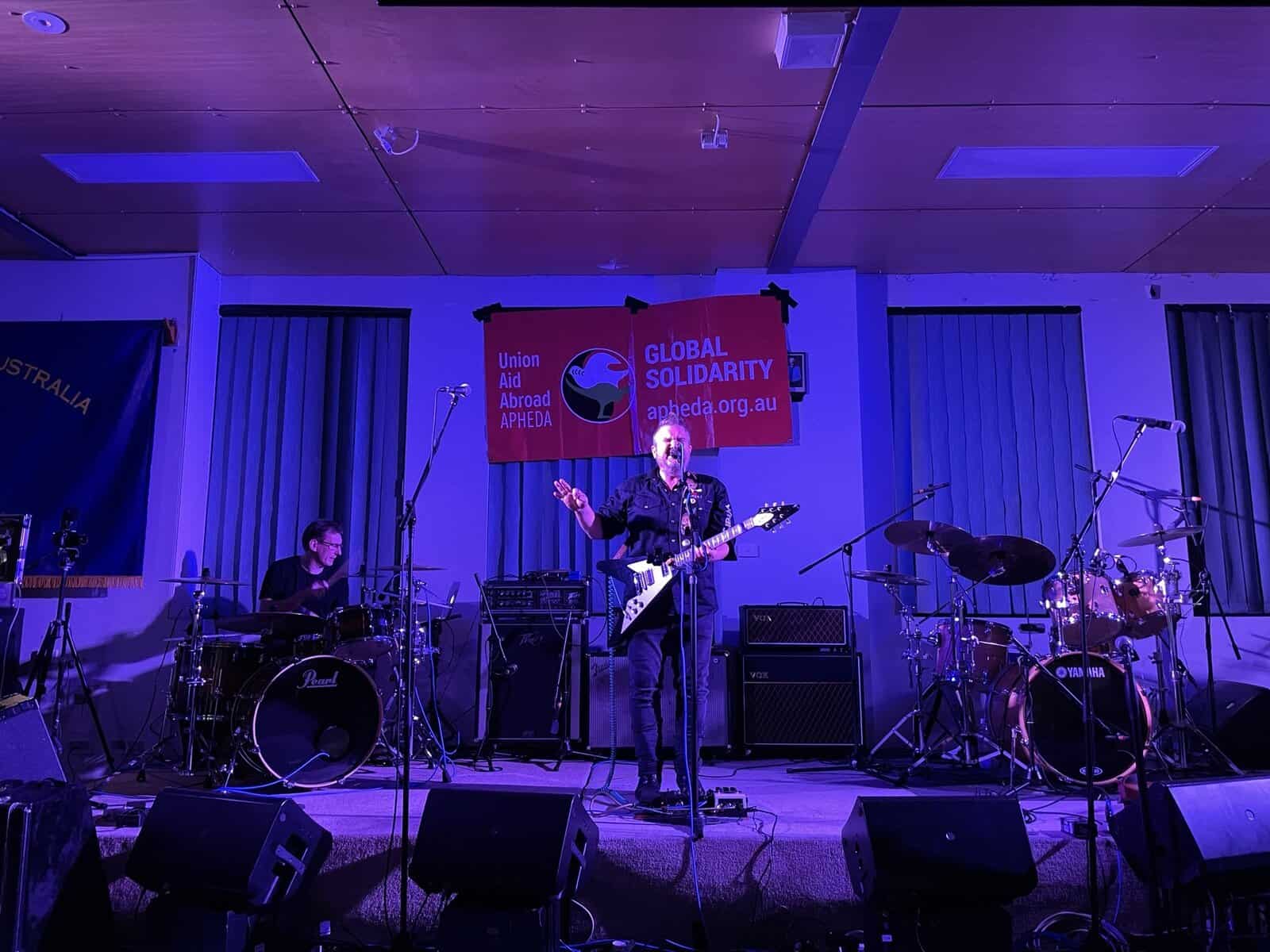 Internationalism and global solidarity on display

In between performances, internationalism and solidarity swept through the room in the form of active bidding on the silent auction, a flurry of raffle ticket buying just before the raffle closed and a speech by Deputy Secretary of MUA Tasmania, Alisha Bull. Alisha spoke with passion about the importance of internationalism and the work of APHEDA (Read more about Alisha in our APHEDA People feature).

“We are all part of something much bigger than ourselves. We can’t turn our backs on the rest of the world. But we as unionists need to stand up and take the lead… We should all be driven to see the world a better place” Watch video of Alisha’s speech

Demonstrating their long-standing connections with Timor Leste and commitment to Global Solidarity, more than twelve Victorian Unions booked tables or bought tickets to what was the first night out with Comrades in a very long time. Several unions donated their extra seats to allow a group of Timorese Seasonal Visa Workers (currently working on farms in outer Melbourne) to attend the event.

Timor tunes in to live-stream of ‘Liberdade’

The highlight of the evening was Paulie Stewart calling all of the Timorese Seasonal Workers  up onto the stage to join the Painters and Dockers and Gil Santos as they performed the song ‘Liberdade’. The song was livestreamed to Timor and APHEDA Timor Leste staff and representatives from APHEDA’s partner organisations tuned in on mobile devices. It truly was solidarity in action. 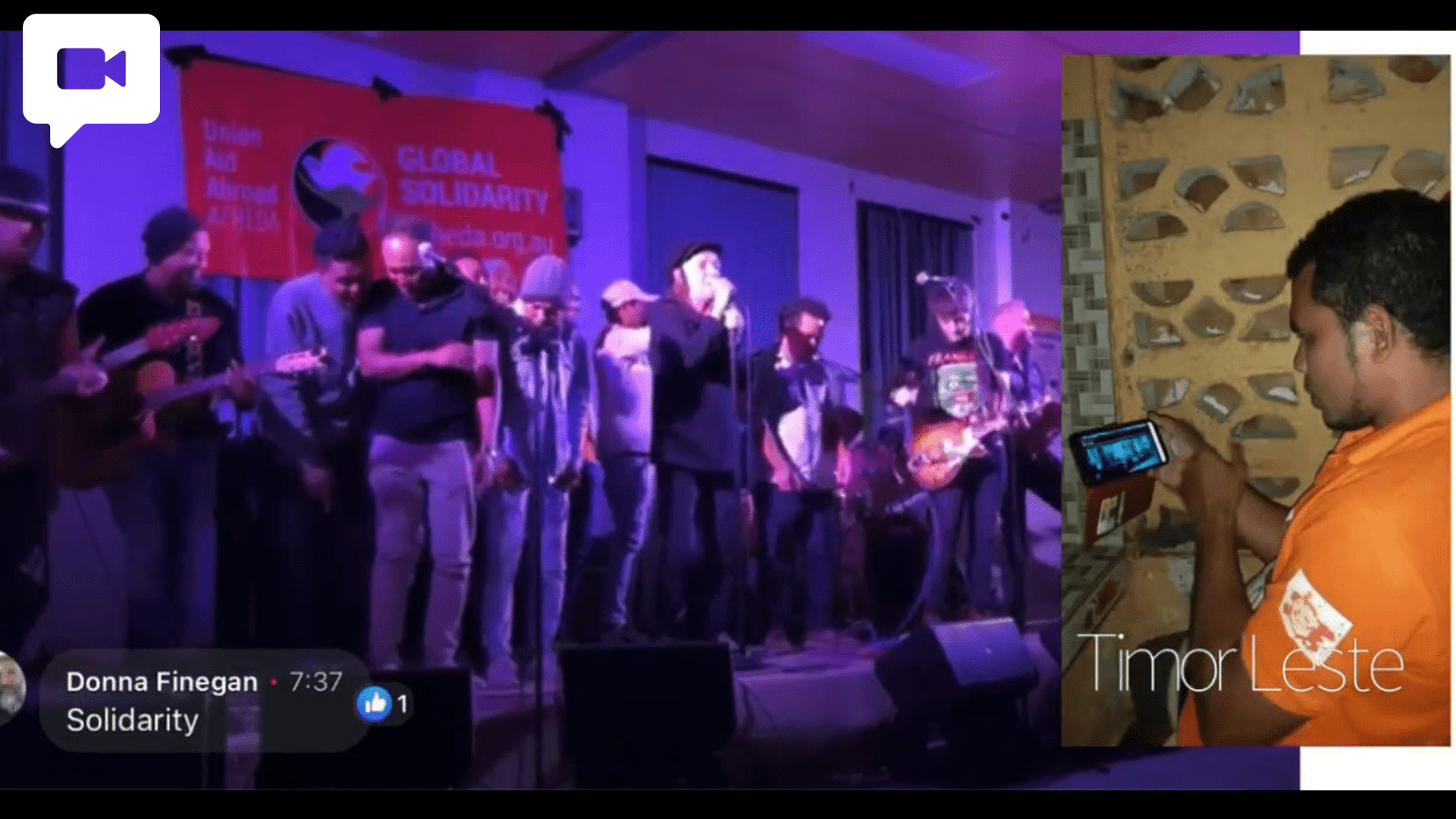 A vote of thanks to everyone who made it happen

Everyone at Union Aid Abroad – APHEDA would like to thank the Maritime Union of Australia (VIC) for their fantastic support pulling this event together and ensuring an awesome atmosphere on the night. Max Ward and Dave Ball were instrumental in getting this event off the ground and deserve to be thanked in their own right. We’d also like to acknowledge the MUA Youth and our amazing volunteers and APHEDA activists who helped with food, bar, check-in, clean-up and dance floor enthusiasm. To the unions and individuals who donated tickets and auction prizes even if they couldn’t join us on the night, we are extremely grateful. And to the wonderful musicians who filled our night with such joy after way too long missing live gigs, we bloody love you all. Solidarity Comrades and Viva Timor Leste! See images

Catastrophic Flooding in Timor Leste over the 2021 Easter Weekend left the capital city of Dili and many rural areas inundated including the total destruction of homes, roads and bridges.