Peace is union business – Day of solidarity with Ukraine 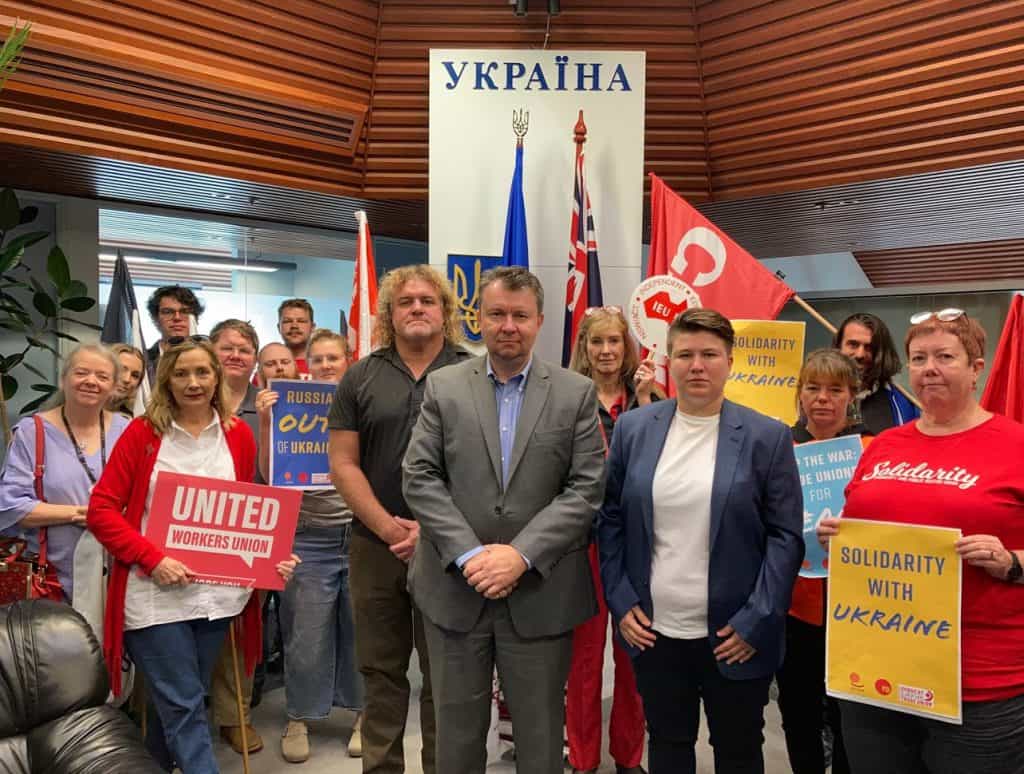 At the Ukrainian embassy in Canberra.

The International Trade Union Federation (ITUC) called a global day of action with Ukraine on March 15. In Australia, unionists gathered outside the Ukrainian consulate in Sydney and the Ukrainian embassy in Canberra.

Head of Mission at the Ukrainian embassy in Canberra Volodmyr Shalkivsky and Honorary Consul of Ukraine in Sydney Jerry Duma warmly received those gathered. They were presented with a statement of solidarity on behalf of the Australian Council of Trade Unions (ACTU).

The statement read in part: “The ACTU joins the global union movement in condemning Russia’s invasion of the Ukraine. We condemn the violence and call on Russian forces leave Ukraine immediately.

“The attack on Ukraine is a violation of international law, and we urge the Morrison Government to work with other countries to support a peaceful solution to this crisis through diplomacy, to ensure peace, democracy and human rights for the people of the Ukraine and Russia.”

At the Sydney rally, executive officer of Union Aid Abroad-APHEDA Kate Lee said: “War brings nothing for workers and their families, nothing for society except destruction and with increasing international economic isolation of Russia, Russian people will also be impacted with poverty and hunger as a result of this war.

“All of us in Australia across the union movement and all social movements must commit to work together in opposition to war, in support of peace and against the nuclear arms race. Peace building, education for peace and coalition-building must be escalated in this time of deep global crisis.”

You can help Ukraine’s workers and their families by donating to the ITUC’s emergency fundraising appeal.

ITUC is also running a petition calling for peace, dialogue and democracy in Ukraine. Sign it here.

The Carmichael Centre has produced a video and short factsheet about the long history of the Australian trade union movement campaigning for peace. It states: “Australian workers from the docks to the factories have long shown solidarity with the international community of workers. Protests, boycotts, and strikes coordinated by unions have been important in bringing public attention to oppression and the violation of workers’ rights throughout history.

The factsheet suggests workplaces can build international solidarity in the following ways:

A great example of unions speaking out against war was the response to the federal government announcing Port Kembla, Newcastle and Brisbane as possible sites for a new defence facility to store nuclear submarines as part of the AUKUS pact with Britain and the United States. Hunter Workers (the peak body for unions in the Hunter valley region), South Coast Labour Council and the Maritime Union of Australia immediately publicly opposed the move and held public rallies opposing the announcement. MUA Southern NSW branch secretary Mick Cross said in a statement: “In the wake of government speculation that Port Kembla may be chosen as the site of a new nuclear submarine base on the east coast of Australia, the Maritime Union of Australia’s Southern NSW Branch reiterates its total opposition to nuclear proliferation.