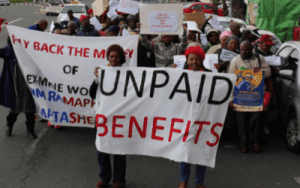 Since 2009, Union Aid Abroad – APHEDA have been partnering with Workers’ World Media Productions (WWMP) in South Africa on a Labour-Community Media Project which aims to provide “quality, relevant and informative media productions and access to the media for the labour movement and working class people.”

The long anti-apartheid struggle was behind the growth of robust mass popular education via joint union-community media, using radio in a variety of languages to reach working women and men in disadvantaged communities. WWMP used radio to introduce key issues including access to quality education; health, transport and housing; HIV; gender-based violence; minimum wages; workplace health; rights to land, water and electricity; corruption; social security and other issues relevant to workers and urban and rural poor across the country.

Against a backdrop of sustained income polarisation – with Blacks (around 90% of the population) earning on average AU$400 per month and Whites earning four times that – Unions are demanding a minimum wage of AU$500 per month. Out of a population of 58 million, less than 10 million are in the formal sector, with full or part-time jobs, and 6 million are in the informal economy or have seasonal jobs in agriculture. Each wage must support a large number of people.

WWMP seeks to raise awareness of this situation using various media platforms. They aim to “develop a participatory labour movement that uses radio, television, print and social media… to ensure that the trade union movement and civil society… is strengthened, informed, mobilized and organised to respond to socio-economic and political challenges…”

Despite rising struggles against poverty across the country, the main union federation COSATU split in 2014 over its political relationship to the ANC government. The new South African Federation Trade Union (SAFTU), based on the strong Metalworkers’ Union (NUMSA), now has 800,000 members.

WWMP sees levels of grassroots community organisation, struggles and leadership as still relatively. Desperation leads to rebellions in townships and campuses, schools and workplaces, but without strategy. The majority of participants are new to organising and are taking up issues in a collective manner, with little organisational experience and limited political awareness and leadership skills.

WWMP aims to support the development of democratic, united and independent grassroots organisations of working class people. Neo-liberal policies have undermined capacities to build independent organisations, with people being in a constant survival mode, having very little leisure time or their own resources to organise themselves.

WWMP has been assisting unorganised workers to organise and join unions. Community care workers have been treated as unskilled volunteers rather than vitally important workers, and are threatened by government outsourcing to high profit anti-union companies. Community care workers have now formed their own trade union, the National Union of Care Workers of South Africa (NUCWOSA) launched in 2016. WWMP developed and ran new shop-stewards’ training and leadership courses in several communities reaching hundreds of shop-stewards and leaders of marginalised workers in the formation period.

“As care workers we provide a valuable service to our communities and society at large yet we are suffering with several problems… We deserve to be treated like professional healthcare workers. Like all other workers, we need and deserve a living wage and decent working conditions.” NUCWOSA Brochure

Looking Forward: 2019 Elections and Beyond

On 8 May 2019, South Africa will hold national elections. As in the past, WWMP will play an independent role in educating people in working class and poor rural communities about voting rights and issues. WWMP will continue their work broadcasting television and radio programs, using the local committees, the production of the Elitsha monthly online newspaper, and expand the advice centres. WWMP will continue to provide training to delegates and officers of existing and emerging unions.