​On Tuesday 13 April 2021, the Foreign Affairs and Aid Subcommittee of the Joint Standing Committee on Foreign Affairs and Trade held a public hearing to examine recent developments in Myanmar in greater depth and to hear from concerned sectors of Australian society. Kate Lee (APHEDA’s Executive Officer) and Michele O’Neil (President of the Australian Council of Trade Unions and Vice Chair of the APHEDA Committee of Management) both gave evidence.

Representatives of Australian government give evidence

The first witnesses to give evidence at the Public Hearing were from the Department of Foreign Affairs and Trade (DFAT), Department of Defence and the Australian Trade and Investment Commission (Austrade). In his opening statement, Mr Ridwaan Jadwat (First Assistant Secretary, Southeast Asia Division, DFAT), said ‘while the pathway ahead for Myanmar remains uncertain, Australia will continue to play an active and constructive role. Our focus is on working with international partners, especially our ASEAN neighbours, to support a cessation of violence and return to the path of democratic transition, in line with the democratically expressed will of the Myanmar people.’

When asked about whether or not the government would guarantee that no Myanmar nationals will be required to return to Myanmar during this period of unrest, Mr Jadwat replied that it was a matter for the Department of Home Affairs. On the matter of the likelihood of Myanmar returning to democracy over the next 12 months, Mr Jadwat said that the ‘prospects look largely pessimistic’. 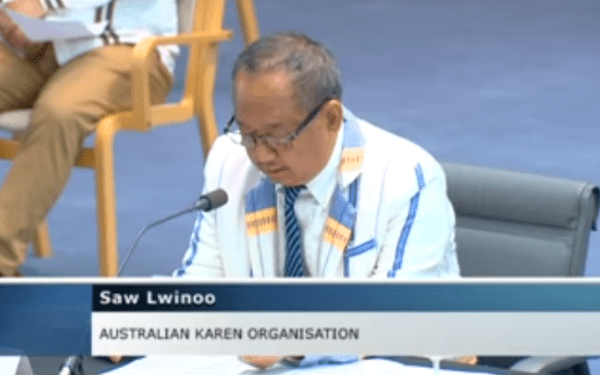 “The Australian Karen Organisation condemns the artillery attacks which have escalated in the northern district of Karen state, displacing over 7,500 people and killing hundreds since early December last year. The repeated deadly air strikes, as recent as 27 March 2021, have also resulted in three fatalities and some serious wounding of eight people. The fear of further indiscriminate air strikes has led to more than 20,000 traumatised people fleeing to find shelter in forested areas, and some are seeking refuge in Thailand.”

Dr Tun Aung Shwe  (Country Director, Football United in Myanmar; founding member of Burmese Community Development Collaboration and member of the Anti-Myanmar Military Dictatorship Network) put forward that the Australian government recognise the body of elected MPs from the 23020 election, known as the Committee Representing Pyidaungsu Hluttaw (CRPH) and support the CRPH in their attempt to bring the military junta to the International Criminal Court for justice. Next he asked that Australia impose sanctions on the military junta and freeze their assets in Australia. Dr Shwe then stated that Australia had a ‘responsibility to protect the people of Myanmar by any possible intervention in collaboration with the US, UK, EU and other allies’. Lastly he urged that Australia provide more humanitarian assistance and ‘initiate cross-border assistance programs to support civil society and media groups’.

Kyaw Soemoe (Convenor Anti-Myanmar Military Dictatorship Network) introduced himself as one of the students who took part in the 1988 uprising.

“…the Australian government can make a major difference in taking the leadership initiative by recognising the legitimate body CRPH, the Committee Representing Pyidaungsu Hluttaw. Very soon, a national unity government will be established.” Read more…

Melinda Tun highlighted the fact that ‘Australia has unique leverage that few other countries have.’

“We are the destination of choice for families and children of senior members of the military regime. Many of them are living and studying here funded by the proceeds of their parents’ military connections…. They must be expelled… We must stop people who are aiding and abetting the Myanmar military in their crimes, including their family members, from enjoying the proceeds of their abuses right here on the shores of this country.”

🇦🇺 Public Hearing on Myanmar: Chris Sidoti (@SpecialCouncil) calls on the Australian govt to implement three cuts as a response to the situation in Myanmar:

Experts and academics call for action

Among the experts and academics providing evidence were Chris Sidoti, a member of the United Nations fact-finding mission on Myanmar and now member of the Special Advisory Council for Myanmar (SAC-M); Nicholas Coppel and Christopher Lamb, both former ambassadors to Myanmar; Ben Bland from the Lowy Institute and Elaine Pearson and Manny Maung from Human Rights Watch.

“Australia should support a global arms embargo through the UN Security Council, should increase its support to civil society groups in Myanmar and should provide safe haven and fast-tracked Australian visas for those at risk there. People in Myanmar are risking their lives every day to challenge the military rule. Words of condemnation are no longer enough. Australia should take concrete actions..” Manny Maung, Human Rights Watch

“The junta seeks to rule through the power of the gun, but it cannot govern through it. While the window of opportunity to influence Myanmar remains open, even if slightly, Australia and its partners must do more to build a coordinated global response that puts peace and stability above rivalry and rancour.” Ben Bland, Lowy Institute 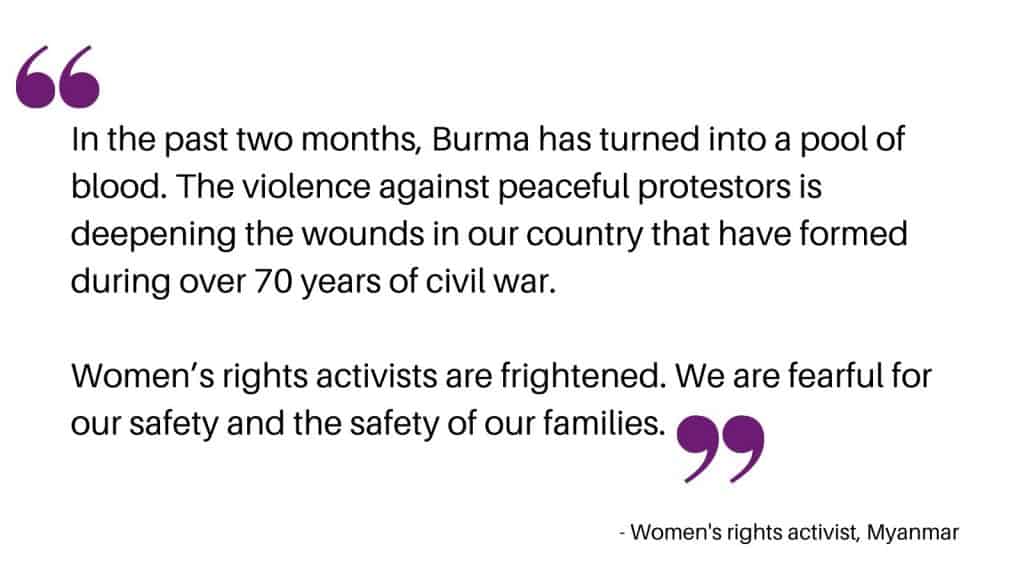 Michele O’Neil (President of the ACTU and Vice Chair of the APHEDA Committee of Management), highlighted the fact that the Australian union movement has been a longstanding supporter of democratic reform in Myanmar and raised the current situation facing trade unionists in Myanmar.

Michele also raised the issue of the Australian government pushing ahead and ratifying the Regional Comprehensive Economic Partnership, RCEP, trade agreement with ASEAN countries, including Myanmar.

“The government should not be entering into a new trade agreement with a brutal military dictatorship. Australia ratifying RCEP while Myanmar is a party to the agreement risks legitimising and further entrenching the military regime. The committee should recommend that the Australian government not ratify an RCEP that includes Myanmar so long as the military coup leaders are in power, and it should recommend that the Morrison government implement sanctions and cut off financial and other support to the military junta.”

I’ve just given evidence at a parliamentary hearing on Australia’s response to the military coup in Myanmar. It’s past the time for urgent action – we need strong Aus Gov sanctions and we should not go ahead with a trade agreement that has Myanmar as a party.#ActNowForMyanmar pic.twitter.com/EqiWkIW5ig

Union Aid Abroad – APHEDA has been working in partnership with civil society organisations on the Thai-Myanmar border since 1995 and with trade unions in Myanmar since 2013. Kate Lee, Executive Officer of APHEDA, followed with the stark numbers and statistics:

“…so far, 25 workers or specifically union leaders have been killed, most shot, and some have been tortured; 60 workers have been arrested; 29 workers are still detained, some at locations unknown; 789 civil servants have been suspended from employment…”

Joel Mackay from Amnesty International Australia acknowledged the inspiring input of the Myanmar diaspora and opened with the fact that ‘the most basic of all of our human rights is under threat in Myanmar—that is, the right to life…’.

It was acknowledged by many attending that there was a consistency across the witnesses in recommendations made to the inquiry.

A full report from the inquiry is yet to be made available. Chair of the Inquiry, Dave Sharma MP, recently wrote this article which may give an indication of future directions.

Since the Public Hearing on Myanmar, the following key developments have taken place: