Raising the number of women in Vietnam’s parliament

Women have long been underrepresented in Vietnam’s parliament. Women are discouraged from holding public office because the election system can be daunting and favours male candidates. There is limited incentive or encouragement for women to overcome these barriers. Once elected, there is little training or support to ensure that they are able to represent their constituents

A five-year project to improve the participation of women in political decision-making has been renewed. Funded by Union Aid Abroad – APHEDA and Irish Aid, the project aims to elevate women in all levels of political leadership in Hai Duong, Phu Yen and Bac Kan Provinces, just North-West of Hanoi, where Union Aid Abroad – APHEDA has been implementing a range of successful projects for almost two decades. 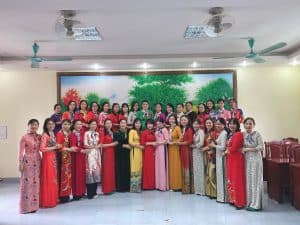 This phase of the project ended in August 2021, having made important contributions to advancing women’s leadership.  Highlights from an independent evaluation found that the project has helped to increase the capacity of 677 women standing for election at the commune, district, provincial and national levels of government. It has helped to change community attitudes and challenge stereotypes about women in leadership and improved the quality of representation of women by elected officials.

A public awareness campaign encouraged women voters to vote in person, as well as encouraged all voters to consider women candidates. This, combined with the increasing number of women candidates with good public speaking skills and with the ability to advocate for women’s issues, meant that in the national election in May last year there was a higher turnout of voters from the targeted project areas compared to the 2016 election. This election also saw the proportion of female deputies reach 30%, the highest since 1976 and an increase of 4% compared to 2016.

A workshop for 50 senior representatives was also held to promote the importance of increasing ethnic minority women’s political participation in Northern Vietnam.

Because of its success, and the ongoing relevance of the issues it is tackling, the Irish Embassy and Union Aid Abroad – APHEDA have agreed to continue the project for a further five years.

Engaging men was a challenge for the project. It was found that men often viewed the activities as women’s issues and delegated less senior or women staff to represent them. With many leadership positions held by men and with these men making decisions that influence women’s participation, it is important that they are encouraged to support change.

Looking forward over next 12 months

Over the next year, the project will begin a program of building networks of peer support and capacity strengthening for the newly elected women deputies, leading into a new five-year program targeting the 2026 general election for even greater participation of women in political decision making.

To achieve this, the Women’s Unions of Bac Kan, Phu Yen and Hai Duong Provinces, with support from Union Aid Abroad – APHEDA and Irish Aid, will establish local clubs at the commune and district levels and build networks between them to support peer-based learning. The project will also provide twelve training sessions for 240 elected women deputies to increase their knowledge, skills and confidence in communication and representation of voters.