Union Aid Abroad-APHEDA, trade unions and ban asbestos networks globally stand with Rajendra Pevekar as he brings the voices of victims of asbestos-related diseases to the Rotterdam Convention meeting in Geneva in May 2017. We ask you to join us and #StandWithRajendra to demand action on chrysotile asbestos now! 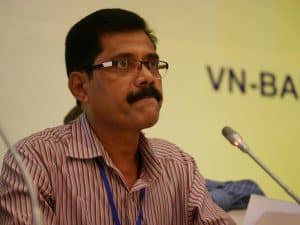 Rajendra is a victim of the deadly global asbestos industry. His father worked in an asbestos company in Mumbai. As a result, both he and his mother now suffer from asbestos-related disease from secondary exposure. Rajendra’s story is not unfamiliar to those who work in the asbestos industry. Workers exposed to asbestos in the workplace inadvertently expose their families to the deadly fibres. They come home with large quantities of asbestos on their clothes, their bodies, in their hair – everywhere.  Now Rajendra faces a difficult choice – treating his mother or treating himself. He has chosen to treat his mother as she has a shorter life.

Rajendra has bravely chosen to speak out on behalf of the 100,000+ people who die from asbestos-related disease each year. He will face representatives from countries who are blocking asbestos from being added to the list of banned chemicals on the Rotterdam Convention. This includes his own country, India. India was one of the few countries to oppose the listing of white asbestos (chrysotile) as a carcinogen at the last Convention. India is one of the largest asbestos importing countries in the Asia-Pacific region.

For the last ten years chrysotile asbestos has been recommended for listing onto the Rotterdam Convention which adds restrictions to its trade. But it’s been blocked by a few countries who gain directly from its export. This must stop. To overcome this problem, a group of 12 African countries have proposed an amendment to the voting system. The amendment calls for a 75% majority method of voting where consensus is not possible. This will enable dangerous chemicals to be listed that are now being vetoed. The amendment will make the voting process consistent with other conventions like the Basel and Stockholm Conventions.

Join us to Stand with Rajendra and asbestos victims everywhere by sharing the petition. A coalition of organisations including Asbestos Ban Groups from the Asia Pacific region, Union Aid Abroad APHEDA, the ITUC and global unions including IndustriALL and BWI have come together to support Rajendra and the tabling of a petition to change the voting rules to list chrysotile asbestos as a banned substance at the Convention meeting.

We call on all delegates to take two actions in Geneva:

What you can do: