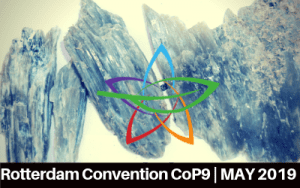 In early May in Geneva, representatives of countries from across the globe will meet for the 9th Conference of Parties (CoP) of the Rotterdam convention. The Rotterdam Convention is an agreement between countries (now 161 countries) around the world to regulate dangerous chemicals and pesticides in order to protect people and the environment. If a chemical is listed on Annex III of the convention then it can only be traded with prior informed consent.

An international network of unions, asbestos victims’ societies, academics, NGOs and Ban Asbestos Networks are signatories to an open letter calling on countries to list chrysotile asbestos on Annex III of the convention and to reform the convention so that a small number of states with economic interests can block listings.

For the last twelve years chrysotile asbestos has been recommended for listing onto the Rotterdam Convention by the conventions independent scientific committee. However, the current requirement for consensus of all Parties before listing means it has been blocked by a few countries who gain directly from its export. In May 2017 a small number of countries, including Russia, India, Kazakhstan, Kyrgyzstan, Syria and Zimbabwe, blocked chrysotile asbestos from being listed.

To break the veto power of a few, an alliance of countries are supporting an amendment to the voting system. The amendment calls for a 75% majority method of voting where consensus is not possible. This will enable dangerous chemicals to be listed that are now being vetoed. The amendment will make the voting process consistent with other parts of Rotterdam Convention as well as other conventions like the Basel and Stockholm Conventions.

Omana George of the Asia Monitor Resource Centre and the leader of a COP9 delegation supporting action on asbestos, said:

“I attended COP8 in 2017 and witnessed first-hand how a handful of asbestos stakeholders were able to frustrate the will of the majority of the Parties who wished to list chrysotile on Annex III in order to protect vulnerable populations. It is unconscionable that the financial interests of these few Parties can block the desires of the many to protect vulnerable populations from toxic exposures.”

“We demand that recommendations of the Convention’s own Chemical Review Committee be respected and supported on the basis of the clear scientific and medical evidence presented.  We call all on all Parties to COP9 to support reform of Article 22 of the Rotterdam Convention in order to allow a 75% majority vote of the Parties to include a chemical on Annex III should consensus fail and finally clear a pathway for listing chrysotile asbestos.”

International unions and activists will be attending the Rotterdam COP in Geneva this May and holding actions to demand reform to the Convention. You can support their work by sharing information on Facebook and Twitter and by becoming a member of Union Aid Abroad – APHEDA to support the Asbestos. Not Here. Not Anywhere. campaign.