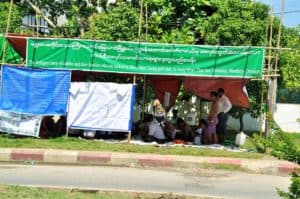 Unemployed golf caddies and their families – many of whom are now living in refugee-like conditions – are protesting their sacking by Shwe Man Taung Golf Club in Mandalay, Myanmar.

Caddies fired from a Burmese golf club have set up camp in Mandalay, the country’s second-biggest city, in an attempt to draw attention to their economic plight.

The now-unemployed caddies from Shwe Man Taung Golf Club, Mandalay, opened their makeshift “refugee camp” on 73 Street in Aung Myay Thar Zan Township, behind the golf club on the western side of Mandalay Hill, on July 27.

Their demands are two-fold: that they be re-employed in line with the final decision of union-level arbitration and that they receive the caddy payments which they say were withheld from them by Shwe Man Taung Golf Club between 2006 and 2015.

The caddies say the camp will remain in place until their demands are met.

“We were workers last year. We have been fighting for our labour rights for more than 10 months and now we have become refugees. We have no support and no help from anyone.”

“The golf club hasn’t paid their salary to them,” Kyaw Naing Oo said.

“The caddies’ income has been purely from golf club players. The caddy workers receive 2500 Kyat ($2) for one round from the players.

Kyaw Naing Oo said when the union started asking the golf club not to withdraw its caddy payments, he as president was fired without explanation last October. Fellow union members who went on strike to seek their president’s reinstatement were also retrenched immediately.

There are about 240 caddies at Shwe-Man-Taung Golf Club, of whom 70 are still fighting for their entitlements.

“We have complained to the township, the district, the division and the union step by step,” Thaung Tin Win, an executive member of the caddie workers union, said.

“On January 1 this year the union-level arbitration board directed the golf club to re-employ all the fired caddies as it hadn’t found any evidence we had been breaking the labour law.

“While we were waiting to go back to work, the golf club manager announced that the club would not take us back.

“The judge asked the golf club manager whether it was guilty or not and the manager admitted the club’s guilt.

“I don’t understand why it is so easy for the golf club owner to fire experienced workers who have been working here for decades without giving us at least some compensation money.”

The caddie workers union collected its annual levies before the members were fired. However, after 10 months of fighting, the budget has been exhausted.

Some workers’ families have become homeless because they can no-longer afford to pay rent on their houses. Some have tried staying in a monastery near the golf club but this is not a viable long-term option.

“We are facing many problems. We are struggling,” Thaung Tin Win said.

“Our only present income is from working as motorcycle taxi drivers.

“I have been working here as a caddy since I was 10 years old.

“I know only the caddy’s job.

“I want to get my job back and I want the caddy money of mine that was cut by the golf club.

“Now it’s raining. Our refugee camp shelter is not enough to cover us but there is nothing we can do. We just have to make a stand in this way.”

“These caddies are not golf club servants or permanent workers; they are just freelance workers.

“They receive money from the golf players.

“They can go back to their homes when their golf players have finished playing their rounds.

“We set rules for them as they are working here. If they don’t follow our rules, they are warned or fired; they agree to these conditions and they also sign a bond to this effect.

“We paid the fine imposed by the judge so the law case had been finalised.

“I have nothing further to say about this case.

“If they reopen the refugee case legally, that is okay as far as we’re concerned.”

Township administrative and police officers visited the refugee camp last week asking the caddies not to proceed with their protest, saying the respective government officers would negotiate to solve their case, but the workers rejected the offer and said their camp would be closed only when they were re-employed.