Samoa First Union on verge of big win for workers

The Samoan Parliament is about to pass a comprehensive new law, which will amend the Labor and Employment Relations Act 2013 to improve consistency with International Labour Organisation (ILO) conventions, clarify employment terms and conditions and improve processes for resolving employment grievances and complaints.

As an affiliate of the Samoan Workers Congress (SWC), the national body for workers on the Samoan National Tripartite Forum between government, employers and employees, SFU were able to significantly influence the bill. Representing private sector workers, they pushed for a fair go for those who are often the lowest paid workers and have historically been disadvantaged under the national labour code.

SFU Senior Organiser and SWC Board Member Saina Tomi is elated with the result.

“It is a long wait for us but it is worth it. The outcome is aligned with exactly what we wanted and fought hard for”.

The reforms are comprehensive. From new clauses prohibiting harassment and sexual harassment in the workplace, to improved leave entitlements, workers will be much better off.

Saina points to a new commitment to review the minimum wage every two years. This issue is of particular concern to SFU, who spearheaded a successful campaign in 2020 to increase the minimum wage from $2.30 tālā ($1.20 AUD) to $3 tālā ($1.60 AUD) an hour. No public sector worker receives less than $4 tālā per hour so this increase was an important step to closing the wage gap between the public and private sectors. This, together with SFU’s advocacy for special consideration during COVID-19 for sustenance has been important to raising the interests of the lowest-paid workers. Now this new commitment to conduct compulsory, regular reviews of the minimum wage will ensure that momentum continues toward their ultimate goal of securing a living wage of at least $5 tālā per hour.

Rights to unionism and strong worker representation have also been significantly improved, with the new legislation allowing union organisers to enter work premises and meet with members. The longstanding restriction on labour inspections has been a bugbear for unions like the SFU, who have had to adopt workarounds to ensure that they could meet with and advise their members in community settings. In another significant move, worker organisations will, for the first time, be able to choose who represents them on the Tripartite Forum. “Under the old law, we had to apply to the Ministry of Labour and then they would submit a recommendation to the Head of State. Now, workers’ organisations can choose for themselves”, Saina says.

Like many around the world, the last couple of years have been very tough for the people of Samoa. While the small island nation was, until recently, largely COVID-free, the economic impacts of border closures have been devastating, leading to huge job losses. The tourism and hospitality sectors have been hit particularly hard with more than 3000 workers losing their jobs.

As a result, demand for places in overseas seasonal work programs has soared, and for the first time Samoans have started participating in large numbers in these schemes. There are now more than 5000 Samoans working on short-term visas in Australia and New Zealand. They have been able to send home much-needed remittances which have been a lifeline for Samoan families and the economy. SFU have pivoted to supporting workers through this process – from helping them with applications and inductions, to assisting them to claim their COVID-19 support payments from Centrelink while in Australia. 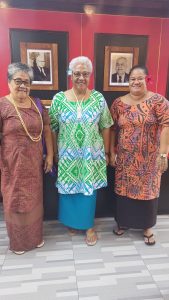 But it hasn’t all been smooth sailing.

Accusations have long been mounting of rampant wage theft, exploitation and unsafe working conditions faced by Pacific workers overseas. SFU say that pre-departure training is lacking and doesn’t adequately prepare workers for life in Australia or New Zealand. There are also concerns around selection processes with the huge surge in demand potentially contributing to social problems. Originally targeting unemployed workers, many skilled workers, including teachers are now leaving their jobs to take up places in these better-paying schemes. This has the potential to devastate villages and Samoa’s ongoing economic development.

SFU have been able to represent these concerns to Samoan decision makers via the Tripartite system, urging the Government to develop a rigorous National Seasonal Workers Policy which addresses these issues. They are calling for revisions to the selection criteria to target only the unemployed who are unskilled and lack the means to acquire these skills. They also want the Government to negotiate fair and just contracts for workers and provide them the opportunity to scrutinise their contracts carefully before signing. They are also calling for the involvement of the SWC in pre-departure orientation provided for workers before they leave the country to ensure that they fully understand and can act upon their rights.

In response to this strong advocacy, and widespread media coverage of exploitation and ‘slave-like’ conditions faced by workers, in April the Samoan Government temporarily suspended their involvement in the seasonal workers programs, and announced a review to identify ways to remedy these problems. Starting this month, the review committee includes members drawn from various Ministries, the ILO, representatives from the Australian and New Zealand High Commissions, employers and workers. As a key member of the SWC, Saina will represent workers on the committee, ensuring that they have a strong voice in the review.

While celebrating these hard-won victories, there is still a lot to do.

As the only private sector union in Samoa, SFU has to deal with every industry. This includes ensuring that employers understand and comply with the new laws – a big task even in a small country!

They will also continue their crucial role ensuring that workers – both in Samoa and those deployed overseas – know and can act on their rights. As well as representing workers on the Seasonal Worker Review Committee, they will keep up their successful organising program. They look forward to conducting workplace visits for the first time to connect with their members but will also continue educating ordinary Samoans in their communities – a strategy developed when they couldn’t visit worksites. Now they can do both, they are confident that their message about fairness and equality for workers will spread even further and help grow a strong and resilient union movement in Samoa.