By Tasneem Roc, campaign manager with the Myanmar Campaign Network.

It’s been a big month for the Myanmar Campaign Network’s #100DayCampaign calling for the Australian government to issue targeted sanctions on the Myanmar military and its extensive business interests within 100 days of the Australian federal election.

The 100-day deadline is up, but the campaign will continue!

Since the 1 February coup the Myanmar junta has murdered 2255 people and the violence has caused over 1.2 million to flee from their homes, leaving them internally displaced.

Trade unions have been declared illegal. Union members and their families have been threatened and arrested, and at least 27 unionists have been killed.

We know the junta is desperate to keep its hands on foreign revenue.

Targeted sanctions on the junta’s military conglomerates and Myanmar’s state-owned enterprises will cut off billions of foreign revenue from the junta, and prevent it from buying the heavy artillery, jets, and aviation fuel it uses to attack civilians. 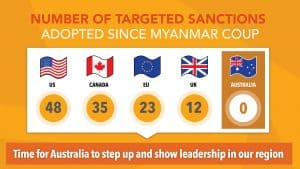 Sanctions work best as part of coordinated international action. The US, UK, EU, and Canada have all issued targeted sanctions on the Myanmar junta and its businesses.

Previous sanctions regimes were a big factor in the military’s decision to transition to a quasi-democratic government commencing in 2010. Sanctions are more effective today, as most of the military’s economic relationships are integrated into the global economy.

The deadline 100 days since the federal election is up, and still Australia has issued no new sanctions.

But we will keep the pressure up until they do.

It’s not too late to join the campaign. Use the online form here https://bit.ly/100dayemail to instantly send an email to your Federal MP to ask that they take action on targeted sanctions.  Over 550 emails have already been sent to local MPs.

August is the month for two significant remembrance events for the Myanmar community. At these events all over the country, many chose to join the #100DayCampaign, supporting the Australian Government issuing targeted sanctions.

The Myanmar Campaign Network joined the CRPH/National Unity Government event in NSW to remember the 34th anniversary of the 8 August 1988 student massacre by the junta. It paid tribute to the innocent students and civilians who lost their lives at the hands of the brutal military regime. 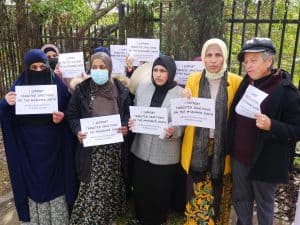 Last week also marked the five-year anniversary of the beginning of the Myanmar military’s brutal campaign against the Rohingya on August 25, 2017. MCN campaign manager Tasneem Roc spoke at the 5th Anniversary of Rohingya genocide commemoration rally at Lakemba organised by Refugee Action Coalition Sydney (RAC), Australian Rohingya Women’s Organisation and the Australian Rohingya Development Organization (ARDO). The Rohingya have been subjected to systemic violence, discrimination, and persecution for decades.

Myanmar Campaign Network called for justice and accountability for the crimes committed against the Rohingya, and an end to the systematic and targeted attacks on civilians in Myanmar.

In early August, National Unity Government Representative office to Australia opened and was well attended by members of parliament, staff from the Department of Foreign Affairs and Trade, Myanmar diaspora, and the Australian media.

Myanmar in the media

Some must-see reports in the Australian media from the past month: