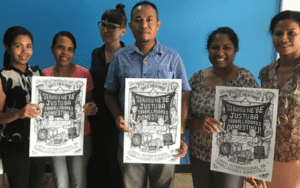 The Working Women’s Centre of Timor Leste (WWCTL) enjoyed an eventful 12 months throughout 2017 and the team is looking forward to consolidating some of their achievements in significant legislative change for Domestic Workers across Timor Leste in 2018.

Established in 2011 with seed funding from the Working Women’s Centres of South Australia and the Northern Territory, WWCTL set out to support the largely undocumented informal sector of Domestic Workers in Timor Leste. Ongoing fundraising through APHEDA including this year’s successful National Tertiary Education Union (NTEU) Bluestocking Week events have ensured that the WWCTL is able to continue its great work.

Through door-to-door organising, the small team at WWCTL were able to encourage hundreds of domestic workers to connect with WWCTL and participate in skills training. The training aims to assist them in their work inside homes of Timorese and expat families primarily located in the capital of Dili.

The investigation into the experiences and challenges of domestic workers was enhanced with support from the New Zealand Embassy in Dili in 2017, allowing the WWCTL team to undertake qualitative and quantitative research into the wages, conditions, and districts of origin of domestic workers in Dili, Suai and Oecusse. This research indicated disproportionate numbers of domestic workers came from the district of Ermera which is also considered to be one of the poorer regions of the country. In addition, levels of education were considerably lower for women engaged from this area often meaning young workers have been open to greater exploitation.

At the same time WWCTL was undertaking key research, surveying hundreds of domestic workers and running focus group meetings, members in Dili were getting more active about their employment rights. WWCTL eagerly participated in the 2017 May Day celebrations followed by the first celebration of International Day of Domestic Workers in Timor Leste on June 16, 2017.

On this day the campaign reached its first milestone when a representative from the Ministry of Labour (SEFOPE) presented the first draft of new legislation to recognise Timorese Domestic workers in labour law. This was well received by the enthusiastic crowd of domestic workers and their supporters – a huge win but only the first step towards implementation.

WWCTL established a consultative committee of NGOs, union representatives, legal centres and labour hire organisation to draft a joint submission to parliament on the proposed legislation to bring it in to line with existing labour law in Timor Leste. The committee involves numerous women’s NGOs in Dili who presented their submission with substantial changes to the proposed draft, in a public consultation with the ministry in November 2017. They argued for amendments to almost every clause and the Secretary of State agreed to each one.

This means wins on:

The current political hiatus in Timor Leste following last year’s unsuccessful minority government and the President’s recent decision to dissolve parliament and force and a new election in 2018, means there will be a gap before the agreed clauses are passed into law this year.

In the interim more training and campaign activities are being planned by domestic workers including ongoing discussions with the consultative group to further strengthen domestic workers ‘ rights at a local and national level.