This letter was read by Siti Kristina in 2013 in Korea. 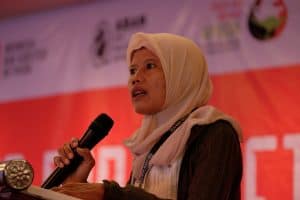 My name is Siti Kristina, I’m 47 years old, and I am a former worker of PT. Trigraha, Cibinong Indonesia.  PT. Trigraha is an asbestos textile factory. We produce asbestos thread, a material for asbestos cloth. We process the raw material of asbestos dust, mix it with cotton and polyester and spin it to make the asbestos thread. We use dry process.

I had been working for this factory since March 1991. In 2013, I was no longer a permanent worker since the companies reduced its asbestos production and expanded its business unit of aluminum material production. Most of the permanent workers, particularly women had to take early retirement.  But then, the company offered us to work again as a contractual worker. On March this year, I finally gained my freedom from asbestos dust. I decided to quit my job and retired. So I totally work for 23 years with asbestos company.

I worked for Trigraha since its first year operation. So I really know the condition inside the factory. In our first five year, we had a clinic inside the factory. Even though all of workers were registered as Jamsostek member (Workers Social Security Systems), most of us used the clinic for our health care. So then we could use the insurance for our family. Later around ’96-‘97 the company closed the clinic and we had to go to Hospital for health care, spending our Jamsostek benefit. At the time, I did not have any health problem. Probably it was because I was still young at that time.

Actually we were happy working for Trigraha. The company provided good facilities and the salary was not so bad. We had a food court, a mosque; everyday we were provided with milk; even though the salary was still as high as minimum wage policy but the company had never suspended its implementation. We all had a good relationship; we respected one another. The management, the front man, the HR, they were all good. We had a friendly ad warmhearted relationship. Compared to the other factories, Trigraha was one of the best in that area.

I had never had any serious health problem until 2009. I started coughing. At the first time, I thought it was just ordinary coughing. I went to hospital almost every three months for a medical examination because of the coughing and fever I had. I felt better a while but then in the next three month, I got sick again. I lost my weight too. I did a medical examination provided by the clinic inside the factory. But I was not satisfied with its result. So I went to a hospital. The doctor was shocked learning my health condition. The doctor said my lung was rough and she asked if I worked in a dusty environment. She gave me some medicines for my lung. For a few months, the coughing was gone but it started again after a while.

In 2010, another staff from the OHS organization came again and asked us to continue the medical examination to a different hospital. This time we went to Dharma Husada Hospital in Rawamangun, Jakarta. However, there was no follow up so we did not know the result. Then in 2010, for the first time I met Yeyong. He was with a staff from the OHS organization before. The staff asked Pak Nana, Bu Dewi, Bu Yusni and Bu Atun to take a medical examination in Cipto Mangunkusumo Hospital (RSCM). We got a thorough examination there, including CT scan. On November 2010, I got an invitation to attend ANROEV meeting in Bandung. It was then the first time I learned that there are many people that have become the victim of asbestos and there are many people who care and join the solidarity on this issue.

Because I was still coughing and went to the clinic every three months, when the doctors said that I was okay, I could not believe them. I was still loosing my weight, still coughing and had a sore throat. In 2012, I met another staff from the OHS organization who informed me about the medical result from Korea. He said that the doctors from Korea had diagnosed me with an early symptom of asbestosis.

It was shocking for me. My friend who got the same result also experienced the same. Off course our families were worried too. We got stressed thinking about our health situation and our future, whether we can be cured or not. From the three people who got diagnosed with early asbestosis, only two who continued doing a follow up health check-up to the hospital. The hospital never mentioned anything about asbestosis early symptoms. But, the doctor who took care me was a pulmonologist from Medika Husada Hospital. I was on medications for six months, consuming medicines everyday, once in two weeks I had to buy the medicines and once a month I had to go for a routine health check-up. It was exhausting.

After six months, I felt better, did not experience difficulties to breath anymore and the coughing also stopped. The doctor said that I had been totally healed. It was in 2013 and it is almost a year now.

We used masks at the workplace, simple sanitary masks, which were replaced once a week. We had to double even triple the mask and put handkerchief as an additional layer to ensure our mouth covered. Back then, the company gave a better one but not anymore. The OHS management was also poor. We were never encouraged to wear a mask or to follow the OHS regulation.

Asbestos goods production is being reduced now. I hope the company has more concern on the welfare of its workers. And I hope the Government thinks more about the condition of workers who work at a dangerous workplace. I really want to be healthy. I wish there will be more communities such as Ban Asbestos across the world who support us. Because, we cannot fight this war alone.

Thank you for listening…