Mud brick house and tent in Dakhla, one of the Western Sahara refugee camps in the south-west. [IMAGE: L OSBORNE, 2016]

Western Sahara is located in Northwest Africa. It is rich in mineral resources, renowned for its fishing grounds and has a great potential for oil and gas. In size, it is similar to the UK.

Western Sahara is a non-self-governing territory, whose people have waited many years for a United Nations-sanctioned referendum of self-determination. It remains on the UN agenda and is considered Africa’s last colony due to its occupation by Morocco, which invaded Western Sahara in 1975. Morocco continues to occupy most of the Territory and has frustrated the rights of the Saharawi people to self-determination.

The Saharawi Republic is a state in waiting with the territory divided by the Berm, a 2700 km long strongly militarised sand wall. The Berm separates the indigenous Saharawi who live under Moroccan occupation and those living in refugee camps in Algeria.

Following the 1975 invasion by Morocco, many Saharawis fled and set up refugee camps near Tindouf in southwest Algeria where over 160,000 Saharawis now live supported by the UN and other humanitarian aid organisations.

The Saharawis have built their own schools and hospitals in the camps but are constantly challenged by the harsh desert environment, including flash flooding, which in October 2015 destroyed around 75% of infrastructure and essential services in the camps.

Western Sahara: 43 years of a state in waiting

The independence struggle in Western Sahara mirrors almost exactly that of the East Timorese. In 1975 when the colonial power Spain withdrew, the neighbouring country, Morocco, invaded. A war ensued until a UN-sponsored ceasefire was declared in 1991 when a referendum was promised.

The International Court of Justice (ICJ) had confirmed in 1975 that Morocco never had any legal rights or sovereignty over Western Sahara which according to the ICJ was not terra nullius before the Spanish colonisation.

Morocco’s occupation is kept in place through brutal force. This occupation includes the Berm, a 2700 km long sand wall constructed by Morocco and manned by 140,000 Moroccan troops. This wall, separating communities and even families is wound in barbed wire, riven with trenches and security boulders, dotted with radars and dog patrols, as well as over 5 million landmines.

The 1991 United Nations ceasefire has constructed a mandate to administer a referendum to allow local Western Saharans to decide upon independence or autonomy within Morocco. Yet the region remains embroiled in instability amid major powers indecision and Moroccan sleight-of-hand.

The Popular Front for the Liberation of Saguia el-Hamra and Río de Oro (POLISARIO), founded in 1973, is recognised by the UN as the legitimate representative of the Sahawari people. In December 2018, the UN managed to bring Morocco and Polisario representatives together to meet face-to-face. A new momentum has been created by the initiation of direct talks between the two parties after a gap of six years.

The Saharawi look to the international community to make an active contribution to maximise the chances of a peaceful and lasting solution to the overdue decolonisation question of Western Sahara.

The Australian government does not recognise Morocco as having legitimacy in governing the territory. Australia has constantly encouraged progress towards a referendum of self-determination and supports the ongoing efforts of the United Nations to resolve the conflict. Australia has also expressed concern about the human rights situation in the Territory and called on the parties to respect human rights. 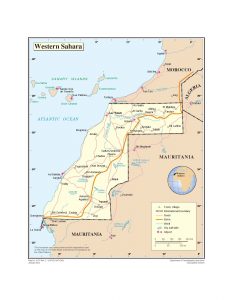 The Australian Union movement, especially the ASU and AWU, have assisted with advocacy, fundraising, sending medical supplies, educational materials, and training Saharawi women in the camps. The fact that Australian unionists contribute to peoples on the other side of the world is greeted with appreciation from the Western Sahara community.

The right of the people of Western Sahara to self-determination is supported by a global network of civil society organisations – the Australia Western Sahara Association is one of these.