Australian unionists and Union Aid Abroad-APHEDA held a rally at the Cambodian embassy in Canberra on February 7 to show solidarity with striking workers in Cambodia. Actions were also held around the world in Indonesia, the Philippines, Korea, Switzerland, Thailand, Pakistan, Bangladesh, the US and the UK.

The global union representing food, farms and hotel workers (IUF) called the global day of action in response to the escalating crackdown against hospitality workers who have been on strike for more than 50 days against the giant NagaWorld hotel and casino complex.

Cambodian authorities have imprisoned 11 union leaders for their involvement in this strike, most of them women.

The rally delivered a letter from Michele O’Neil, President of the Australian Council of Trade Unions addressed to Cambodian Prime Minister Hun Sen. It urged the government to drop the charges against the union activists and release them immediately and unconditionally. The rally also called on Nagaworld to reinstate 365 unfairly terminated workers and negotiate with the union to restore the rights and protect the well-being of 4000 union members.

In response the rally in Canberra, Nagaworld workers flooded Union Aid Abroad’s social media pages with messages of thanks. “We need union in NagaWorld”. “NagaWorld must respect labor law of Cambodia.”

Background to the strike

In December last year, workers at NagaWorld casino and hotel began striking to protest management’s refusal to engage in good faith negotiations over the forced mass redundancy of over 1,300 workers that left many destitute.

By the end of the month, police began arresting workers and leaders of the union.

A turning point came on January 4, when union president Sithar Chhim was violently arrested on the picket line by plainclothes police. Other union leaders were also arrested.

The 11 people who have been arrested have been charged with incitement offences under the Criminal Code which carry a sentence of up to 5 years imprisonment. They are not being allowed to contact their families, despite requesting family support.

Over the past two weeks, the situation has escalated. Under the guise of COVID-19, authorities first insisted striking workers were tested for COVID-19, following reports that one Nagaworld worker may have been positive. Despite the union agreeing to test in small groups for safety and security purposes, the government broke up the strike and move workers on buses to COVID-19 testing sites.

After isolating for a week, strikers again tried to set up their protest outside the headquarters of Nagaworld. But once again police moved in and arrested 64 protestors on February 21, claiming they were obstructing health measures.

Human Rights Watch has criticised the Cambodian government for “abusing public health measures to repress workers’ right to strike and other basic rights”. Phil Robertson, deputy Asia director at Human Rights Watch said: “The Cambodian authorities are stooping to new lows by bringing criminal charges in the guise of public health measures to end a strike.”

Union Aid Abroad-APHEDA is continuing to campaign in solidarity with the Nagaworld workers until all arrested unionists are released and the charges are dropped.

To show your support for this campaign, please sign the petition here: https://www.labourstartcampaigns.net/show_campaign.cgi?c=5040 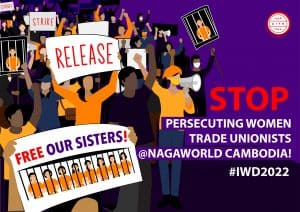