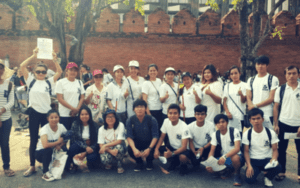 The School for Shan State Nationalities Youth (SSSNY) has been operating for in Chiang Mai, Thailand for over 17 years. SSSNY builds the capacity of youth from different backgrounds and ethnicities in Shan State through its Social Justice Education Program (SJEP). Formed by a group of youth from Shan State in May 2001, the school runs the social justice education program for youth to become active citizens participating in social and political change in Myanmar. Union Aid Abroad APHEDA has proudly provided support for the school since their foundation.

SSSNY has directly trained and empowered almost 618 dedicated youth at its school in Chiang Mai and a further 600 during courses ran inside Shan State, Myanmar. The school keeps track of all of its alumni who are working actively across all sectors. Former students work across NGOs, international organisations and governments to promote human rights, equality and justice towards genuine and sustainable peace and development in Myanmar.

The 16th SJEP came to a completion in December 2016 with 33 youth from Shan State taking part. The program was delayed by a month due to heavy rains and flooding which prevented many students from travelling to Chiang Mai. To make up for lost time, the school week was increased from five days to six days. During the Program, a monitoring visit by members of the Australian Department of Foreign Affairs and Trade’s Australian NGO Cooperation Program (ANCP) took place. They reported the following: “The SSSNY SJEP project provides good value for money given the transformative nature of the program. The rigorous application process seeks to ensure only committed students are successful. Statistics provided indicate that 85% of the 500+ graduates of the program have returned to continue their work within the communities. The team found that the project is managed very effectively with staff at all levels having the appropriate skills to carry out their duties. Staff and students were engaged and enthusiastic during our visit, displaying professionalism and deep knowledge with a clear commitment to the program. All staff and students were willing contributors to our discussions.”

The School is staffed by 8 committed team members led by Director Charm Tong, herself a Shan Refugee and human rights activist. The school also has a six member advisory team who provide input on the schools strategic planning and support for project implementation. Each year the SJEP curriculum includes core subjects on human rights, environmental justice, social studies, systems of government, democracy, federalism, gender equality, media and community development and conflict and peace building. This allows participants to gain new analytical skills for effective functioning within their organisations and communities.

What the future holds

In the next 12 months, SSSNY aims to run two ‘2-month’ residential SJEP’s at the School in Chiang Mai. SSSNY will also run three ‘14-day’ Community Leadership Empowerment Trainings (CLDT’s) for youth leaders from marginalised, conflict affected and displaced communities and networks from various ethnic groups and townships in Shan State, Myanmar. The overarching goal of these trainings and programs is to strengthen the role of ethnic civil society, in delivering community service infrastructures, as well as contributing to genuine change towards a democratic system of governance in Shan State and Myanmar.

Given the complexities of the political situation in Shan State, SSSNY will continue to play a unique role in forming bridges among young people from different communities and on different sides of the peace process, focusing on inclusion of marginalised conflict-affected populations. This is essential, to create a new generation of progressive young leaders who will promote a culture of trust, tolerance and inclusiveness, which can mend the social divisions that the current government is strategically exploiting and worsening.