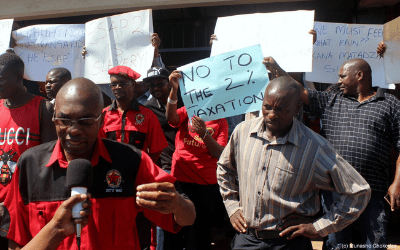 The Zimbabwe Congress of Trade Unions (ZCTU) is the central union federation of Zimbabwe and has been playing a leadership role in democratic civil society since 1981. Union Aid Abroad – APHEDA has been partnering with the ZCTU since 2000, starting with providing support for high impact occupational health and safety and HIV projects including education, policy and support for workers with HIV. In recent years, as the country was driven into political and economic crisis by Mugabe, Australian unions joined with other international unions in assisting ZCTU to continue campaigning to defend basic workers’ and democratic rights.

After the fall of a dictator, a new crisis emerges

In the last year, Zimbabwe has undergone a historic change. A military coup finally led to the end of the rule of President Mugabe in November 2017. The newly elected government of Emmerson Mnangagwa promised its people that it would avoid the country spiralling into turmoil. Yet the official unemployment rate is now 90% and millions of Zimbabwean working people remain outside the country.

People are queueing for days for fuel and food. Many workers are not getting paid. The new Zimbabwean bond notes, officially pegged to the American dollar, have crashed in value. Cholera is responsible for killing 52 people in a high-density suburb of Harare, due to broken water and sewerage infrastructures. And reports of police brutality at the hands of the Zimbabwe Republic Police (ZRP) are becoming more widespread as concerns grows about the heavy-handedness of the authorities against peaceful protest.

Workers and unionists beaten and arrested

On 11 October the Zimbabwean unions and other democratic organisations called for peaceful demonstrations about the economic crisis raising the issues of new tax measures that have seen the price of basic commodities skyrocket.

During the protests, dozens of ZCTU leaders were beaten and arrested. In a statement released on 12 October, ZCTU strongly condemned ‘the act of the police as it is contrary to the Constitution of Zimbabwe that gives workers the right to demonstrate peacefully.’ The persecution of ZCTU members is ongoing with Secretary General Japhet Moyo, President Peter Mustasa and five others set to appear in court at the end of October.

Advocating for workers’ rights in a time of crisis

Despite the economic and social crisis and against a backdrop of police brutality, ZCTU continue their important work campaigning for the rights of workers, including the empowerment of women, gender equality and equity in trade unions.

ZCTU have also been forced to revisit their earlier campaigns to educate and support workers with HIV. In late October 2018, a self-proclaimed prophet, doctor and businessman, Walter Magaya, made claims that he had found a cure for HIV/AIDS and that his cure was scientifically proven. Magaya is the head of Prophetic Healing and Deliverance Ministries which boasts a satellite broadcast television station. There are over 1.4 million people living with HIV and AIDS in Zimbabwe and ZCTU have urged workers to protect themselves and their families from the use of medicines that have not been tested and verified.

As the economy spirals further into crisis, Zimbabweans are lining up for food and sleeping in queues waiting for petrol. It is a country in desperate need of aid. Sadly, no one trusts that any resources will not be stolen by the ruling party elite and the struggle continues.

Union Aid Abroad – APHEDA with support from Australian unionists will continue to work with ZCTU on their worker’s rights advocacy campaign and express sincere solidarity for the difficult times ahead.