Background to the campaign 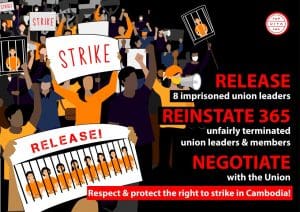 ember 18, 2021 workers at NagaWorld casino hotel began striking to protest management’s refusal to engage in good faith negotiations over the forced mass redundancy of over 1,300 workers that left many destitute.

On December 31, police began arresting workers and leaders of the LRSU. On January 4, 2022, LRSU President Sithar Chhim was violently arrested on the picket line by plainclothes police. Other union leaders were also arrested.

Eight people are currently in detention, all charged with incitement offences under the Criminal Code which carry a sentence of up to 5 years imprisonment.