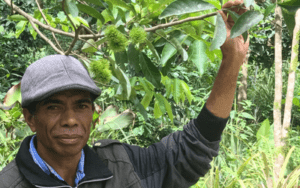 Alberto Martins Guterres, President of UNAER, holds a coffee plant leaf in the district of Ermera.

UNAER’s vision is to achieve social justice for farmers though building a sovereign agricultural sector which has a spirit of collectivism, social equality, solidarity and is sustainable from generation to generation.

Together with two other farmer organising projects, APHEDA partners across the country, UNAER is focused on developing the capacity of farming communities to develop socially and financially via dedicated training on sustainable farming practices that provide the communities with a year-round income.

The district of Ermera is the largest coffee growing area of Timor Leste but is also considered to be one of the poorest municipalities due to the lack of an alternate income during the non-coffee harvest seasons.

UNAER has a strong focus on the development of young community leaders and offers a six-month intensive training course for farmers on leadership and sustainable farming based on the Via Campesino/Paolo Freire model of popular education, advocacy and community cooperatives. Young leaders are expected to spend a period of their training working within their own communities to pass on the skills they have learned to the rest of the community base.

UNAER’s elected President, Alberto Martins Guterres has a very hands-on approach to his leadership, providing not only direct training and support to community bases across the region but also through building a green-house on his own land to demonstrate how seedlings are cultivated for sustainable integrated crops such as rambutan and teak.

During a monitoring visit in January this year, APHEDA observed a five-day training course for Camalpun farmers on integrated farming techniques as well as a Community Base meeting in Mertutu attended by over 50 community members. The Camalpun farmers are now growing a variety of alternative crops during the non-coffee season including banana, papaya, lemon, mandarin, orange, pineapple and dragon-fruit and selling their produce directly to buyers based in the nearby capital city of Dili. In Mertutu a nursery has been established in the hope that next season will provide a variety of new crops to sustain the whole mountainside community.

Timorese farmers gain legal rights to farm their own land

Beyond the successful farming and economic outcomes for organised community bases, UNAER also has one of the strongest political voices for farmers and is an active participant in MOKATIL (Timor Leste’s International Via Campesino representative). UNAER’s fight for land reform was successfully promulgated into law in 2017, allowing Timorese farmers to obtain legal rights to farm their own land following centuries of colonisation, forced labour for corporations and land grabbing.

UNAER’s ‘Empower UNAER’s Farmers Towards Sustainable Farming in Timor Leste’ is supported by the Australian Government through the Australian NGO Cooperation Program (ANCP).