Taking the power back: How CoPower is creating energy democracy

CoPower is an Australian energy cooperative that sells electricity to households and small to medium businesses across the country. Backed by unions and environmental groups, it operates as a non-profit, with a portion of the funds being redirected to community projects. This year CoPower donated $2902 to Union Aid Abroad-APHEDA’s partnership with CLASS Nepal, which supports workers on the frontlines of dangerous global warming to build worker power for a just and equitable transition.

We spoke to CoPower co-founder Godfrey Moase about why he thought it was necessary to start a non-profit energy cooperative and what impact PowerShop’s decision to sell out to Shell has had on its membership.

How did CoPower get started and what motivated it?

The idea for CoPower came from reading Naomi Klein’s ‘This Changes Everything’ back in 2015. It was thinking about how the broader union movement could intervene within the climate crisis, while recognising that we are also in a crisis of labour, and probably a broader systemic crisis.

If we were in the early 1970s and facing the extent of global warming as it is today, we could have called some general strikes and national days of action and had tripartite meetings in Canberra and worked out a national plan. But that’s not the case now. So, we needed to work through something that could begin to turn things around, not on its own, but as an intervention that can make a difference across multiple crises.

Then you approached unions to get involved?

Yes, so we approached a bunch of unions, cooperatives, NGOs and community power groups. We really wanted CoPower to sit at the intersection of various social movements that brought different strengths and experience different problems. But we thought that there was real value and strength to what we could do if we sat at that intersection.

There’s a lot of other smaller energy retailers who also promote green and ethical power, what makes CoPower different to those?

I think what makes CoPower different, is its commitment to democratic processes. There are other cooperatives and social enterprises, but our model is different because, number one, we’re not reliant on any small group of well-off people. We’ve deliberately set it up so that it is situated within the social movements and within the labour movement, the climate action movement and the cooperative movements.

Number two, it is deliberately structured so that it can be a member-benefit for organisations within those movements in order to assist them with building their own power. And three, it is the only one in that space, where ordinary people can have a say over significant economic decisions, and then take that experience and use it in other parts of their lives.

And so that is quite a radical proposition. And therefore, at heart what makes us different is that we don’t see the energy transition as just an environmental or technical transition but also a social transition. It’s hard to capture that. We’re not going to get a star rating anywhere for putting a significant amount of our funds into international climate justice or for building solidarity with low-waged workers. But we think that that’s still just as integral to building the social support required to make the transition.

“At heart what makes us different is that we don’t see the energy transition as just an environmental or technical transition but also a social transition.”

Can you explain a bit more about how the democratic side of it works? And how the solidarity credits work?

It’s possible for someone to engage with CoPower like they would any other energy provider, where it’s just a bill that you pay and you don’t have to worry about it. And for a lot of people at different points in their lives, that’s necessary.

But customer members get to allocate the electricity revenue on a one person, one vote basis. This is a form of participatory budgeting that is not as widely practised in Australia as in other parts of the world.

So, from last year’s participatory budget, our members voted to spend 25% of the cooperative’s electricity revenue on what we call a solidarity credit. What we mean by that is putting funds in the hands of people who are experiencing income precarity. We ideally try and do that through direct credits off people’s bills. So, on their bill it will say ‘solidarity credit’, and then there’ll be a chunk of money coming off their bill.

How we realise that will probably change from year to year as customer members have ideas and then vote on propositions. But currently, we’ve gone through a process of consulting with customer members and member organisations about where they feel there’s a particular need. So, at the moment, we’re supporting farm workers who have had disruptions in their income for whatever reason, whether they’ve suffered illness, or been terminated from the job – because it’s very hard for temporary migrant workers to intersect with our very porous social safety net, which is more holes and less net. And so that’s where that money is going between now and the next time we redo the budget.

How do you choose where members can put the solidarity credits towards? 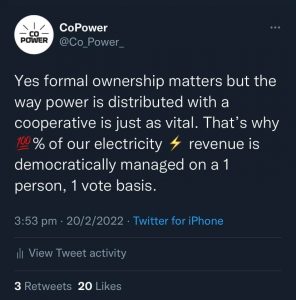 It emerged out of an act of mutual aid during Covid, where we put half of the cooperative’s credits to people who weren’t getting income. And the way we did that is through customer members, so people self-nominated whether they could pass their solidarity credit on to us no extra cost to them. Then we reallocated that on an equal share to people who nominated that they needed some assistance.

This year, we decided to ask the member organisations what would be particularly helpful for their members. And the farmworkers support came up through that process. Then we put that out to our customer members, is this a thing we feel comfortable supporting this year? That got voted up overwhelmingly. And so, it’s a continuous process of dialogue and of never thinking that any one thing is the answer forever but just applying and learning and debriefing and then reapplying.

What will happen at the end of this financial year, at the end of this participatory budgeting here, all these decisions will come back to the customer members about well, what do you think we should do differently with the solidarity credit programme? How do you think we should spend that? And then we’ll work out together what portion it should be based on all the other priorities that we might want to fit in.

When Shell took over ownership of Powershop last year, what impact did that have on CoPower?

We got a pretty big surge in signups. I think we got about 2600 new people switching across, which effectively means there is an extra $100,000 per year that is now under democratic management, and people get to have a say where that money goes.

And just to be very clear about where that money comes from, we are a cooperative that engages collectively with a retailer [Energy Locals] that is pretty ethical in the scheme of things and ranks fairly highly in the green electricity guide. But we redirect money that would have otherwise gone on advertising and sales and marketing. We use our social movements to spread the word about us and that money that would have gone on a TV ad or sponsoring a professional sports team is the money that we’re redirecting into the commons.

That PowerShop boost would not have occurred if we were just a trade union movement-only cooperative. The only reason that we increased our members tenfold was because we had built years of relationships. So that environmental groups knew that we weren’t saying that the power that we buy the open market from the grid is better than the power that anyone else buys on the market from the grid. They knew that we weren’t trying to claim that because they knew that we had this not-for-profit model where funds that would otherwise go towards the corporate sector would be reinvested for ecological and social purposes. They felt comfortable saying, ‘Hey, here’s an option that addresses the ownership question’. We’re not just putting up the next small retailer that’s going to be bought by the next global corporation.

What plans do you have for the year ahead?

I’m looking forward to increasing the total money that we spend on community renewable energy. We’ll be able to be a significant funder for a bunch of different solar and energy efficiency projects for community groups. Like sports clubs, or community-owned houses and not-for-profit art spaces, so that’d be fantastic.

Being able to increase the impact that we’re having through APHEDA’s energy democracy and climate and energy programme is great. The climate crisis is global so we have to have a global dimension to what we do, no matter the scale of CoPower, and being able to draw on the strength of our social movement partnerships to make a difference like that is huge. And I think what would be really interesting this year is if we can, as a first for the cooperative as well is support First Nations organising to build up First Nations-owned renewable energy. Whether we can do something that’s actually helpful in that space is quite exciting to me as well.

APHEDA is proud to be a founding member of CoPower. Join the movement and switch your homes’ electricity today.