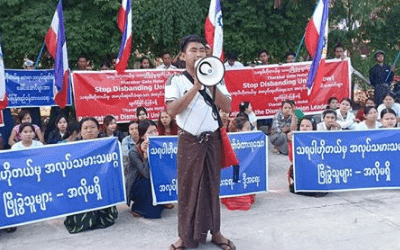 Workers in Bagan rally in solidarity with workers on strike [IMAGE: MICS]

5 November 2018: Around 100 workers from Tharabar Gate Hotel union in the historic city of Bagan, Myanmar have been on strike since October 12, 2018. The workers are members of a workplace union affiliated to the Hotel Chitthu Township Level Labour Organisation Bagan-Nyaung (HLOB), which is affiliated to the Myanmar Industries Craft & Services Trade Unions Federation (MICS-TUsF).

The workers’ discontent originated from their employer’s arbitrary decision to breach their employment contract (EC) in June 2018 by removing the transportation facility provided to workers. Breaches of the EC continued in August with the employer removing the worker’s canteen and substituting it with a measly 500 Kyat ($AU0.40c) meal allowance. On August 23, the employer then announced a 10 per cent workforce cut due to ‘low profits’. The union responded by appealing to the employer not to implement the planned workforce cuts. The workers explained they were willing to take unpaid leave to prevent the planned job cuts. However, on August 24, the employer terminated 12 workers of which 9 were union members including the union President and 2 union committee members.

Several negotiations have taken place since August 27. HLOB negotiated the case with management but to no avail. HLOB concluded that the termination was merely a strategy by the employer to bust the union. The case was also mediated at the township conciliation body and Mandalay regional government.

In September 2018, MICS and HLOB formed a negotiation committee. The committee held a meeting with the UMFCCI (Union of Myanmar Federation of Chamber of Commerce and Industry) in Yangon. The UMFCCI, however, suggested that negotiations should take place at the location where the dispute occurred. The union assisted by HLOB and MICS then launched a strike on October 12. The employer responded by reinstating the 3 non-union workers but not the 9 workers who belong to the trade union.

The campaign to reinstate union members

MICS TUsF is now launching a fully-fledged national campaign to demand the reinstatement of the 9 workers, the protection of the right to the Freedom of Association and better working conditions at Tharabar Gate Hotel. On 3 November, a peaceful assembly was organised in Mandalay joined by unions from various sectors as an initial national solidarity campaign to support the striking workers at Tharabar Gate Hotel.