The Nepalese earthquake – three years on 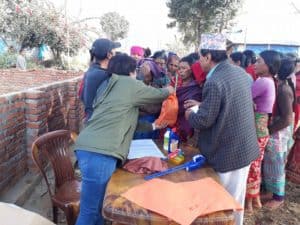 The 8.1 magnitude earthquake in Nepal on 25 April 2015 killed more than 9,000 people and injured another 23,000. It was followed by 400 aftershocks occurring at 20-30 minute intervals which seriously impacted the working lives and economy of the country. Livestock were also killed, 750,000 homes were damaged and 60,895 trade union members and their families were affected. The tourism sector, the second largest GDP contributor, was deeply damaged. The economic impact is estimated to be USD10billion (50% of Nepal’s GDP).

Our partnership included provisions of the following:

The reconstruction was seriously affected by political instability. Nepal’s prime ministership changed four times leading to delays in reconstruction policies, alongside setbacks caused by the election process itself. A goods and services blockade was initiated by the Indian government which also further exacerbated efforts.

Unions mobilised through their members

APHEDA’s partner unions worked with government authorities and provided support in ways which benefitted the whole community, especially those in remote areas and from disadvantaged backgrounds (e.g. Dalits, a term mostly used for groups in South Asia that have been subjected to untouchability). More than 500 volunteer trade union members were deployed in the relief, reconstruction and lobbying/advocacy work, further amplifying the actual funds donated to assist them. The 12 social mobilisers were key in acting on behalf of the communities and for the equitable and nondiscriminatory distribution of relief.