Timor Leste: Unions continue to fight for workers’ rights against a backdrop of instability

Union Aid Abroad – APHEDA works with the Timorese union confederation (the KSTL) and unions in Timor Leste to fight for workers’ rights. Against a backdrop of political instability over the past twelve months, the KSTL have been working hard to push through key industrial legislation while continuing to fight for an increase to the minimum wage. Meanwhile the general workers union (SJT-TL) represents workers from a number of sectors locally and also support Timorese workers who have been selected for the Seasonal Worker Program (SWP) in Australia. 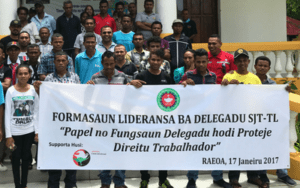 Since its inception in 2001, the Australian union movement has been the single largest source of external support for the Konfederasaun Sindikatu Timor-Leste (KSTL), Timor’s peak union body and its affiliates.

In May 2018 Timor Leste held its second national parliamentary elections in less than twelve months. This followed the unsuccessful attempt by a minority coalition to form government after the national elections held in July 2017. Unable to resolve the deadlock between the minority government and the opposition who voted in a block against the passing of budget decisions, the President dissolved the parliament in January 2018 and called a new election which was held on 12 May. An alliance of three political parties – CNRT, PLP and KHUNTO – was successful in forming government and the new cabinet and Prime Minister were officially sworn in in early June.

The inability for the Timorese government to function effectively has had a negative flow-on effect for the Timorese trade union movement. One particular effect has been delaying the progress of key industrial legislation still being negotiated on behalf of Timorese workers who are regularly represented at the table by KSTL’s General Secretary, Zito Da Costa.

The KSTL and their affiliates continue to push for an increase in the minimum wage based on surveys they conducted on Decent Living Needs in 2014. This survey indicated that the minimum wage should increase from US$150 per month to US$192-$200 per month. The increase has been supported in some areas of government but has also been met with the usual fears around impact of wage rises on investment. Union members are developing a wage campaign strategy to keep up the pressure on the government.

The KSTL has also been involved in drafting national OHS legislation which is currently awaiting Ministry approval. The draft law provides for direct involvement of the unions to address safety issues and participate in incident investigation. 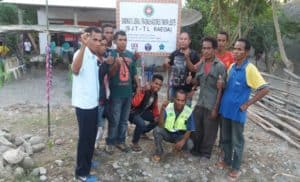 One of the most active unions in Timor Leste is the SJT-TL (General Workers Union). The SJT-TL represent members across multiple industries including commerce (both retail and small workshops), industry (including manufacturing and construction), hospitality and tourism and public service. Over the past 12 months the SJT-TL has had seen some excellent organising outcomes, particularly since opening its first branch in the district of Oecusse where major construction projects are currently underway. Four of the five major construction companies in Oecusse now have a collective agreement with workers taking industrial action to enshrine their rights. In addition the newly built Heineken factory outside of Dili already boasts 75% union density.

The SJT-TL has been actively supporting East Timorese Workers who have been selected to work, mainly on farms, under the Seasonal Worker Program in Australia. In pre-departure workshops, SJT-TL train workers to understand their workplace rights in Australia including the right to join a union. In early July 2018, Union Aid Abroad – APHEDA and the National Union of Workers (NUW) will be co-delivering training to SJT-TL Organisers and Delegates. This training will include seasonal worker delegates from the NUW who have been volunteering with the SJT-TL upon their return from active involvement with the union in Australia. Stay tuned for an update on this training in July/August 2018.