Shane Reside, APHEDA’s Timor Leste organiser, offers up an insight to his work when he visits APHEDA projects in East Timor.

Twenty East-Timorese farm and hospitality workers are sitting in a large room, fans whirring overhead.  The instructor in front of them is pushing through a description of what they can expect from 6 months of working in Australia under the Seasonal Workers Program (SWP).  Dili, Timor Leste’s capital city of nearly 200,000 people, is dripping with late January’s build up of humidity.  The next day, these twenty young workers are going to board a plane bound for Australia where they will be working picking fruit and vegetables, waiting tables, doing dishes and cleaning the floors.

Since the Australian government began allowing temporary migrant labourers in under the SWP, multiple cases of these workers being badly exploited by their employers have emerged.  As APHEDA’s Timor Leste organiser, I am in the training as part of a push to secure Australian union access to all SWP pre-departure training, so that these workers will have the chance to get strong, independent advice on the realities of the industries they’re entering into.  The Australian unions involved are inviting these workers to join with them in the struggle to refuse attempts by big business to increase profits by driving down the wages paid to workers in these industries.

We finish, walk out into the stifling heat and climb into APHEDA’s dusty, beaten twin-cab ute parked in the mud out front.  Elisabeth Araujo, APHEDA Timor’s country coordinator, climbs behind the steering wheel, while I buckle in to the passenger seat.  Elisabeth won’t let me drive – she says that in her experience its best that Australians leave driving to the Timorese.  As we wind through Dili’s potholed chaos, Elisabeth tells me that she’s very happy with how we’re going and is keen to ensure that the Timorese union confederation, the KSTL, makes the most out of the opportunity.

We drive down a long, narrow lane way with high, wire-topped brick fences on either side and arrive at the KSTL office.  The office is a besser block four bedroom home re-purposed into the nerve centre of the Timorese national union movement.  We climb down from the twin-cab, wade through the humidity and enter through a side door directly into the meeting room.  The room itself is an airless, windowless lean-to at the rear of the building constructed out of 14mm ply. Today it’s stifling.

Elisabeth and I sit with five national union officials and drip sweat on to our notebooks as we discuss the progress on the pre-departure training.  The KSTL general secretary, Zito Da Costa, is also happy with the progress made. For Zito, this campaign is a compliment to their strategy to organise Timorese workers.It’s about organising capital when it comes to Timor, and organising workers when they travel for capital. 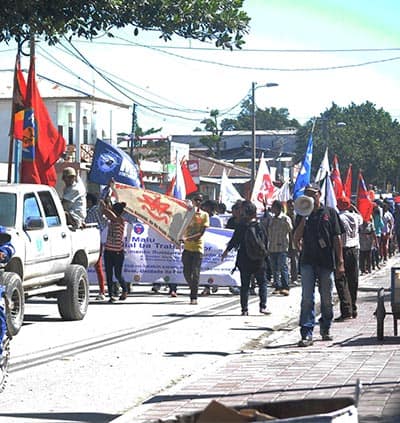