Broadcast on national television, the forum promoted dignity and gender equality in the workplace, renewing the campaign for equal legal and social protections for domestic workers in Timor Leste. 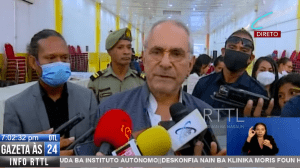 The speeches, panel discussion and Q&A with the packed-out audience focused on how Timor-Leste can be a world leader by codifying the ILO Domestic Workers Convention (ILO C189) into national law. The Special Law for Domestic workers, which has been sitting as a draft on ministerial desks for several years, would enshrine effective labour rights including minimum wages, maximum hours of work, paid leave and other important conditions already available to other workers in the formal sector. If implemented by parliament it promises to have powerful implications for domestic workers but remains stalled in bureaucratic processes.

Government representatives declared their support, live on television, for the special legislation, renewing their promise to present the bill to the Council of Ministers – the next step towards approval. This was applauded by advocates and domestic workers, who stood up and declared their intention to consolidate a domestic workers union.

Why this legislation matters

Despite attempts to increase formal employment in Timor Leste, the dominance of informal sector employment continues; accounting for around 60% of the workforce. According to the 2015 Census, more than 30,000 workers are employed as housekeepers, home-based social workers and related services – over 90% are women.

Domestic work is therefore crucial to Timor Leste’s ongoing development, providing important economic opportunities in a growing country with one of the world’s youngest populations.  However, these workers, many from low-income households in rural areas who come to the capital Dili to find work, are exposed. Working in private homes they are isolated and hard to reach. Without unions, labour regulations, or a strong social security system, they are particularly vulnerable to economic hardship and precarity, exploitation, and social and political exclusion. Many don’t consider them “workers” and their concerns are often considered fringe “women’s issues” – competing for space or completely left out of policy discussions.

These challenges have been inflamed in recent years by political uncertainties, natural disasters like last year’s catastrophic Easter floods and COVID-19, which have put the issue, and passage of the legislation, on the backburner. The impact of repeated lockdowns on workers has been severe, especially for vulnerable women concentrated in jobs, like domestic work, not currently covered by labour law protections, only highlighting the need for strong, legally enforceable protections.

WWCTL and their allies are organising for change

It is with these types of challenges in mind that the WWCTL was established in 2011. Launched by APHEDA’s Dili office, the original motivation was not just supporting domestic workers, but a more ambitious goal of ensuring that the emerging union movement was oriented towards women’s issues and the informal sector. 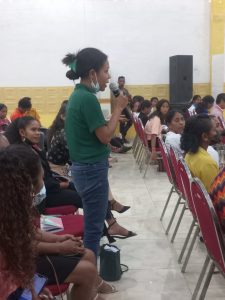 With the longstanding support of the Australian government, academics, activists and unions, an idea sprouted into a movement, and eleven years on, WWCTL has established itself as a primary source of information on workplace rights, providing education, support and advocacy for vulnerable women workers in Timor Leste.

WWCTL successfully organises and empowers domestic workers to fight for their rights. From training in cooking, housecleaning, and taking care of children – through to personal, health and leadership skills – their professional development program provides not only the skills domestic workers need to thrive in employment, but also the confidence to advocate. Organising themselves and each other, they are now courageously speaking out and demanding their rights to dignity and decent working conditions.

Another important role WWCTL plays is increasing the visibility of domestic work in the public sphere. Organising campaign initiatives, community workshops and seminars, like this one, across the country, they are working with a network of allies to change perceptions about the rights and importance of informal workers. Their advocacy means that the concept of domestic work as ‘work’ is entering the public consciousness, that policymakers and the media are turning their attention to their plight, and that workers know who to call when they have questions or face problems.

And it’s not just workers – employers are now also calling WWCTL’s hotline to find potential workers and receive information about their responsibilities regarding contracts, salaries, treatment and dispute settlement. As a result, many now have better conditions, with most of WWCTL’s membership now earning at least the minimum wage, despite the ongoing lack of legal protections.

The last few years have seen unprecedent challenges. But thanks to the hard work of organisations like WWCTL, some of the most vulnerable workers haven’t been left behind. By hosting these kinds of events they are ensuing that domestic work receives the attention it deserves – and with a strong network of civil society allies – they are leading the way towards securing concrete legal protections for all Timorese workers.

The groundswell of support demonstrated from leaders at the seminar, including the new President, has reenergised the campaign. With support and solidarity from their allies – both within Timor-Leste and overseas – they will surely build on their expanding and very admirable list of achievements by securing these long-awaited protections.