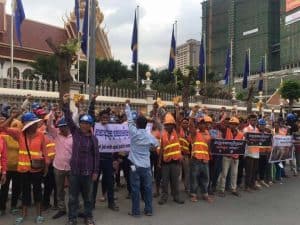 Mr Tola Moeun has worked in the field of labour and human rights in Cambodia for more than 12 years. Taking on various roles within local and international labour rights organisations, including Building and Woodworkers International (BWI), Tola has established himself as one of Cambodia’s leading labour and human rights activists. Tola is a founding member and the current Executive Director of the Centre for Alliance of Labour & Human Rights (CENTRAL). Tola is currently in Australia on a trip advocating for human rights in Cambodia.

1. Cambodia had a local election on June 4th. What is your analysis of the election results and what it means for workers’ rights in Cambodia?

To provide some context, the election was preceded by multiple threats from the Prime Minister that Cambodia would return to civil war should the ruling party lose. It also took place in a context of extreme political oppression with more than two dozen political prisoners behind bars – the majority of those being opposition party members and elected officials.

Further, July 9 marks the one year anniversary of the brutal murder of Cambodia’s most ardent government critic, Dr. Kem Ley. Last year, Dr. Ley was shot dead in broad daylight in central Phnom Penh. Five UN Special Rapporteurs jointly stated that the circumstances of his death “have given rise to deep concerns in view of his standing as a critic of the government and his regular comments in the media highlighting governance and human rights concerns.”

The commune election results see the ruling Cambodian People’s Party claiming around 70 percent of the country’s commune chief positions. Despite the political context, this a major drop from the 97 percent the ruling party won in 2012 but one far smaller than the opposition had been hoping to inflict.

We are working with Australian partners to try and mobilize observers for the next national election to be held in July 2018 – another election which will also surely be defined by threats, intimidation and widespread irregularities.

It’s difficult to project what this means for workers but with a large amount of newly-elected opposition party officials there might be a little bit more space for workers to approach the local authorities for certain kinds of support. This could include obtaining legal documents to comply with requirements of the National Social Security Fund (NSSF) which covers workers in workplace accidents. It’s very hard to say that workers’ rights will be improved more broadly because this was a local election, but if there is continued support for the opposition in the national election there is great hope for workers and other groups of marginalized people in Cambodia that there will be real change. A victory in the national election would lead to much more accountable and responsible governance. Not just for workers but even the private sector. Figures from the ILO show that 10 cents of every dollar is lost to corruption under the current government. In the garment sector alone this is more than $600 million a year. Without a corrupt government those losses could be passed on to real wage increases for workers.

2. Last year new trade union laws were passed restricting the activities of union and union leaders. Can you give us an overview of the laws and the implications since?

There are serious concerns under the Trade Union Law which was passed in May last year. In general the law definitely undermines and restricts the the right to organise and weakens the right to collective bargaining. At the same time the right to strike (formerly guaranteed and regulated by the Labor Law) has been seriously limited through complex procedural and administrative requirements.

The law states that in order to conduct any union activity you need to be registered. If not, you have no rights, no protections, anything deemed to be “union activity” will be considered illegal and subject to fines and imprisonment. So what is union activity? Meeting workers, explaining certain things about working conditions, explaining about rights – all these simple tasks are union activities. Under the law they are illegal if a union is not yet registered. It is completely illogical. How are we supposed to register a union if we can organize?

Since the passage of the union law, not a single independent union has been registered.

The law also puts legal barriers on existing unions. Article 54 of the law is being interpreted to mean that only majority unions can take cases to conciliation or arbitration. Dismissed workers from independent unions have no recourse.

This makes it really difficult to establish and maintain independent union membership. It is extremely difficult to organize and no mechanism to support workers if we do.

We should also note the wider, continued attacks on independent unions as evidenced by criminalisation, such as the Cambrew case: http://www.phnompenhpost.com/national/cambrews-60k-case-against-union-begins.

3. Garment workers won a new minimum wage last year. But workers in other industries have been left behind. Is there any government commitment to a common minimum wage? How are unions and others organising to National Minimum wage for all?

There is no green light from the government on a proposed national minimum wage. There is still no national minimum wage in Cambodia, despite the Labor Law requiring one to be set in the private sector through sub-decree. It is 20 years since that law was passed, and it has not been done. The exception is the garment industry which has a minimum wage created through a special agreement between the Cambodian government, unions and the Garment Manufacturers’ Association of Cambodia (GMAC). Currently the minimum wage for garment workers is US$153 per month. However, this is a very recent improvement and one paid for in blood.

Other sectors are not as well organized as the garment sector. Nationally less than 5% of the total workforce is unionised, compared to 60 percent plus in garment. The union voice is still weak in the other sectors, and there is limited bargaining power. But unions and labour support groups are demanding a national minimum wage and we are going to increase our voice leading into the national election. We will throw the ball to the political parties and whichever party supports a national minimum wage we will throw our support behind them.

4. Tell us about the rights for working women in Cambodia? Is there any provision in labour law for paid maternity leave? What protections are there against sexual harassment at work? What about pay equity?

Legal provisions provide some protection and benefits for women workers. Non-discrimination, sexual harassment, equal pay for equal work are legislated. Currently, Article 182 of the Labor Law provides 90 days at 50% pay for maternity leave. But this is too short and payment only amounts to around $200 during leave. The International Labor Organization (ILO) has revised the convention to 14 weeks paid leave. We are demanding the government ratify convention 183. Even now there are problems with implementation of protections. The widespread use of short-term contracts of three to six months undermine the right to maternity leave. Pregnant women too often don’t have their contracts renewed. There are also provisions for breastfeeding of one hour per day, light work for those returning from maternity leave. There are some good legal provisions but there are serious issues with implementation.

5. Hundreds of thousands of Cambodians leave the country every year seeking work across Asia, forming part of a migrant workforce of millions. Tell us about the state of the economy which drives this or what drives them to look for work outside Cambodia?

Push factors such as poor minimum wage, absence of a national minimum wage and rising costs of living have seen more than a million Cambodians leave to find work in Thailand. The government claims poverty and unemployment are minimal under their definitions of those terms. But one in five Cambodians is living in multi-dimensional poverty, and unemployment or underemployment is serious with such a huge part of the workforce employed in the informal sector. Even with full time work, wages do not rescue families from poverty.

The rapid decline of agriculture has also played a huge role. In the last decade farmers have decreased from around 86% of the workforce to less than 40%. This is not because Cambodians want to move into the industrial sectors, it is because of the scale of economic land concessions – robbing farmers of their land and livelihood. The government has conceded half of the arable land and more than a quarter of the country’s surface to private companies under land concession schemes. More than half a million farmers and their families have been affected by land grabbing, pushed into debt with microfinance institutions and forced to migrate. We estimate that around 85% of Cambodians are migrants – either internal or external. If they come to Phnom Penh, wages are not enough to lift them out of debt, and in order to survive they head to Thailand where wages are almost double.

AND a sneaky 6th question…

6. Climate change is set to impact Cambodia heavily in the coming years. For example in a 2015 ILO report, the impacts of heat at work for those working outdoors will punish Cambodians who will be forced to work less hours due to heat impacts. How are unions and NGOs raising these concerns amongst local people and politicians?

We need to do more. It is difficult to mobilise people around climate change which is an abstract concept for them. We need to expand our membership in other sectors, agriculture, plantations and others. We need to come together with Cambodian partners, like the Cambodian youth groups who are working to combat illegal logging and deforestation and send a clear message to the government. There are serious and increasing problems with both drought and flooding. Rain is no longer consistent in Cambodia. We need to start raising these issues.

This will affect us all and we all need to raise our voice.

Last chance! Join the Fight for a Living Wage in Cambodia

Unionists in Cambodia are under pressure. They are fighting hard and campaigning for living wages and a social security system for all workers as part of the struggle against inequality.

Union Aid Abroad – APHEDA is working with Cambodian unions and the global union network for living wages and a just social security system – because we know that together, we can win.

Chip in and help us support unionists in Cambodia fighting for a minimum wage.
Donations of $2 and over to APHEDA’ s Overseas Project Fund Account are tax deductible.