89 days after the military coup, the Myanmar junta has not shown any sign of ending the violence against the Myanmar people. Despite the consensus made at the ASEAN Leader Meeting (ALM) on April 24, the junta has continued arresting civilians including trade unionists.  Repression against workers from various sectors has escalated. Almost 1700 public sector workers including ministries staff, railway workers, and doctors are suspended from their work and charged with penal code 505 A. Among the 743 people killed, around 24 are workers and trade union members.

The brutal crackdown on Hlaing Thar Yar (township in Yangon) protests killed at least 50 people on March 14. Martial law was then imposed in the industrial zones of the township prompting workers to flee.  At least two union members from Action Labour Rights and Solidarity Trade Union of Myanmar (two labour rights organisations) were killed on that day. What followed next has been bleak for the future of manufacturing industries in the country which had contributed to the economic growth and created more than a million jobs. Nevertheless, trade unions and workers from various sectors, frontline of the civil disobedience movement, remain committed to struggle to reclaim democracy in the country. This article briefly depicts the unions’ struggle in organizing workers, a long-term work in sustaining working people’s power under the military junta.

The impact of military law and the crackdown on workers 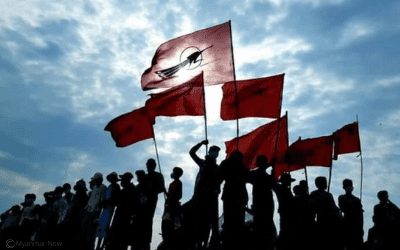 After the military law was imposed, workers in Hlaing Thar Yar, Shwe Pyi Thar and South Dagon industrial zones are faced not only with uncertainty but also daily terror of an unsafe living environment. On March 16, workers demanding their 15-day wages and overtime at Xiang Jia Factory were brutally dispersed by the army. The number of workers killed on that day was under reported due to shutdown of internet. Three workers who were arrested on that day were sentenced to three years in prison on April 12. The junta cracked down on the South Dagon protest for two consecutive days on March 29-30 killing 20 people. One union leader, a member of Myanmar Industry Crafts Services-Trade Union federation was killed on March 29. In Hlaing Thar Yar, the military-appointed ward chief asked the head of the village to pay 10,000 Kyat for each dormitories/workers’ hostel located within the ward. They also spy workers’ mobility around the dormitories. Women workers are vulnerable to harassment and intimidation from soldiers deployed on the streets. There have been reports of soldiers asking for money from workers and confiscating their mobile phones while walking to work. Many opted to flee the zone but then confronted with the bitter reality of not having an income to survive in the rural areas. The workers who decided to stay in the industrial zones under martial law are relying on trade unions to have better and safer workplace.

Shwe Myint* from a union working in the industrial zone said that there were factories in which the management was open to have dialogue with trade unions regarding the workplace situation under martial law. The union has mapped out the situation at 15 factories in Shwe Pyi Thar and Hlaing Thar Yar in which at least 5 factories agreed to have dialogue with workers’ appointed representatives. At a factory supplying a well-known UK fashion brand, the management agreed to have dialogue with two labour rights organizations and agreed to reinstate more than 200 workers in March. In another example, a supplier of various international footwear welcomed the formation of trade union at the workplace level with the brand representative recognising the formation of a trade union. However, due to a shortage of raw materials since the start of the coup, they could not guarantee the production could be sustained. A national federation developed an initiative in the beginning of the Civil Disobedience Movement (CDM) by concluding a collective agreement with some managers allowing the workers to take unpaid leave.

When martial law was imposed, the federation performed a quick mapping in Hlaing Thar Yar, South Dagon and Mandalay. Based on the mapping, at least 10 factories in South Dagon, Hlaing Thar Yar and Mandalay have been willing to be in dialogue with the union’s workplace coordination committee (WCC). There is a factory, a subsidiary of a multinational company producing dish soap and detergent, that is providing temporary shelter for workers to ensure their safety during the martial law. This was the result of dialogue with the WCC. Some factories in South Dagon, during the production suspension, paid the workers 40 percent of wages while opening dialogue with the WCC.

Still, the uncertainty of sustaining the production remains. Most of the factories in the industrial zones supplying for international brands will shut down production in May citing the shortage of raw materials and concern over safety of their staffs. The current production is to meet the last order with remaining raw materials.

The important role of trade unions under martial law

Under martial law, the role of trade unions is central in providing advocacy to ensure the workers’ safety and access to justice and remedy for workers impacted by the draconian regulation under the law. Having dialogue with some employers to ensure the protection of workers’ rights and safety is only one step. Soon, in the coming months, with more factories predicted to be collapsing, trade unions are taking steps to protect workers. In the union-employer dialogue, some employers have been open in disclosing the upcoming situation enabling unions to calculate compensation and other benefits that should be received by the workers in the event of total job loss.

“The workers are entitled to safe jobs, decent work and access to remedies when their economic and political rights are violated,” said a union leader in Hlaing Thar Yar. “We support democracy. The workers now understand the importance of democracy (democratic political system) and how the coup (authoritarian system) affect our work and lives in general,” said a union leader in Mandalay. “We fight for better society as a whole including workers’ rights, now the workers who still work at factories they have a strong sense that to unionize is to have themselves protected,” he continued.

Trade unions are active in collecting information and reports on human rights violation experienced by the workers and their families under restricted internet connection. The information serves as evidence for the affected workers to access justice and remedies in the future. The national federation with its active engagement in the regional level CDM has also lent their skill to help other sectors active in the CDM but un-unionized. The federation, with union background and experience, is helping other sectors and community groups on how to maintain collective action and obtaining public support in the CDM.

Thus, the role of trade unions is central at in various aspects of movement for democracy. Besides being in the frontline, the unions also play a vital role in democratising the workplace and society in general, which will form part of the historical legacy of the CDM. By continuing to support the union’s activities in Myanmar, we also contribute to help workers whose rights have been deprived and violated under the coup, have access to justice and remedies.