Di Butler died suddenly in Balmain on 6 July 2022, and her family held a very moving celebration of her life in Sydney on 26 July.

Di worked for APHEDA on HIV and women’s projects in Vietnam and Cambodia for two decades beginning in 1995. Di came from a working-class background near Newcastle and became a nurse. She was always a strong trade unionist, socialist, feminist and fighter for justice. She was Nursing Unit Manager when Kirketon Rd Centre was established in Kings Cross in 1987 as a primary health care service for sex workers, drug users, homeless and Indigenous people, pioneering harm minimisation strategies. Later, Di assisted the World Health Organisation in responding to HIV in the Pacific and South East Asia. 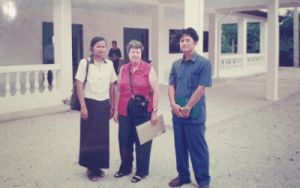 In 1995, APHEDA began a complex program in Vietnam on HIV, in association with the leadership of the Women’s Union and Vietnam General Confederation of Labour. The program also worked with trade unions, women and sex workers in Cambodia. Di had a true love for the people of Cambodia and Vietnam and had respect for their history. Di and her husband, Joe Gluckstern went to live in Hanoi before the establishment of an APHEDA office. In Vietnam, Di assisted provincial Women’s Unions to do pragmatic sexual and reproductive health promotion for women, particularly in rural areas. The trade unions developed policies and education sometimes drawing on Australian building workers’ union examples, with the slogan, “Work Safe, Play Safe” about safe practices in the workplace, but also in the trade union guest houses.

Di made many trips over many years as an APHEDA volunteer to Cambodia to work with women in trade unions, and women’s rights organisations, around reproductive and sexual health. Many of the people who worked with her sent messages of condolence. As a sign of how much she was respected, a Buddhist ceremony was held in Phnom Penh in remembrance of her life. 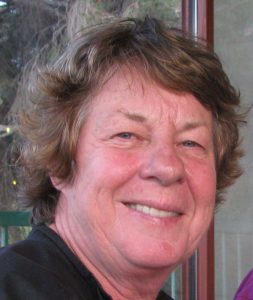 Barbara Fitzgerald recalled Di’s tireless work over so many years. “She worked closely with Serey Phal and CWDA to organise sex workers — poor women being blamed for HIV/AIDS. The Phnom Penh sex workers were a big favourite of Di’s. The sex workers were educated to understand HIV, how to protect themselves especially through condom use, about drug use, and about how to defend and advance their rights. The sex workers went on to form the CPU which is still operating today with Union Aid Abroad – APHEDA and Australian trade union support.

“Di also played a major role in educating other workers. She ran an extensive program on HIV/AIDS as a union issue, with the International Labour Organization and the seven major Cambodian union federations. This was about organising workers to understand HIV, how to promote prevention in the workplace and in the social environment of the workers, and importantly how to combat stigma against workers with HIV. Di contributed to an HIV project with APHEDA and the Japan International Cooperation Agency (JICA) researching and educating garment workers, mainly country girls who had moved to Phnom Penh to work in the factories.

“Rural communities were not forgotten either. Di contributed to major reproductive right, HIV and drugs awareness programs, conducted by APHEDA, JICA and other NGOs among rural women, with our provincial rural women’s development centre partners.”

For many years Di also volunteered in Australia, at union conferences, and enthusiastically taking part in protests for working class and social justice issues. She is very much missed by her large family, many friends, colleagues and comrades, in Australia, Cambodia, Vietnam, New York and elsewhere. In the history of the labour movement, women’s rights, or HIV, it is people such as Di, working patiently and determinedly, at the grassroots, national leadership and international levels, that contribute so much to change.