Ian Tuit has proudly worked in national and state workplace safety agencies for 25 years. During that time he’s also been a passionate union delegate for the Public Service Association of NSW, and a member of Union Aid Abroad. We had a chat with Ian about union, solidarity and safety at work.

What does it mean to be union to you?
Ian: A union is a welfare organisation. We look after the collective interests of all people in the workplace. We help each other in times of need. As an individual I can’t possibly solve all the problems in my workplace – but as part of a much bigger union of people, we can solve more of our problems!

What does it mean to be APHEDA to you?
Ian: APHEDA is about helping people change their lives. It’s got a similar organising idea to what I see a union having in any workplace. It educates, informs and helps people organise for change.

Why do you think it’s important for APHEDA to grow its membership base, those contributing monthly to the work, to 20,000 by 2025?
Ian: We’re now in a period where Australian government overseas aid is very low. So the value of Union Aid Abroad’s work becomes even more important. More members means that the work of APHEDA can be expanded and the impact of that work is increased.

What part of your work are you most connected to/proud of? Why?

Ian: The campaign to end the use of asbestos stands out for me. In the advanced economies of the world we have strong regulation around workplace hazards such asbestos. We know the dangers of asbestos – we’ve won the right to workplaces free of asbestos in countries like Australia, yet in a country like Indonesia, where more than a million Australians visit every year, those workplace safety standards don’t exist – we’re working with comrades there to change that situation.

What do you see as the work (areas, issues, etc.) that is most important for Union Aid Abroad to focus on into the future?
Ian: As well as anti-asbestos campaigning, campaigns on other chemical exposures in the workplace could be looked at as well. In a period of globalisation, the developed economies have exported a lot of their dangerous jobs. So a global perspective on workplace issues becomes more important – there’s no point claiming that we’re increasing safety in a place like Australia if all we’re doing is shipping dirty, dangerous jobs overseas and buying cheap product in return.

When you have one-on-one conversations with people asking them to join Union Aid Abroad as a member how do you describe the work and ask people to join? Do they say yes?!?
Ian: Most people haven’t heard of APHEDA so it’s important to say it’s the union movement’s international solidarity agency – they get that! When this asbestos campaign came along I had a great ‘hook’ to make it more immediate for people. The UN says that the right to work is a human right, but we’ve got to make sure it’s the right to safe work. 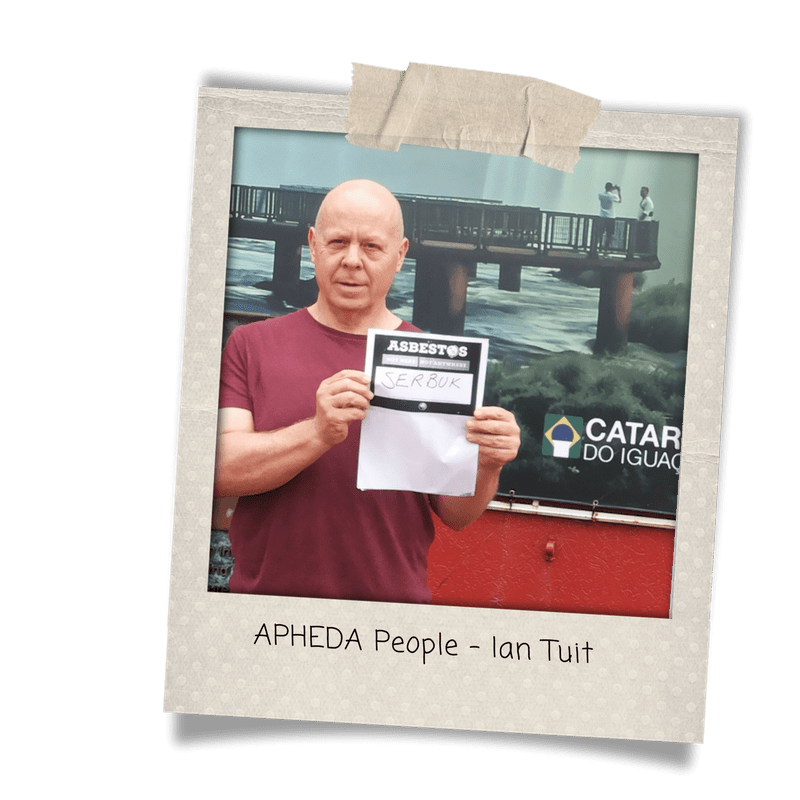