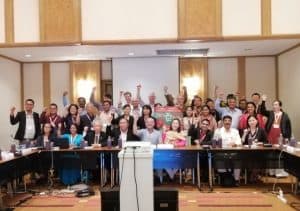 Unions from across the Asia-Pacific have gathered together to demand a just transition for workers on the front-line of climate change. In the inaugural Just Transition Conference in May 2019, over thirty unionists from twenty countries came together in Bangkok to share experiences and solutions for climate-proofing industries and workers.

Asia Pacific on the front-line of climate change

The Asia Pacific is the region most impacted by dangerous global warming. Seventy per cent of the region’s workforce is in the informal economy and these workers are on the front-lines of global warming. Increased frequency and severity of extreme weather is making livelihoods more precarious and eroding basic human rights.

Meanwhile, developing Asian economies are seeing huge growth in energy use and have plans to construct large pipelines of new fossil fuel generation, especially coal-fired. Such growth in new fossil fuels is not compatible with limiting dangerous global warming to safe levels.

“I just arrived from an extreme, off-the-charts heat wave in Tokyo. We have eleven years to stabilise the climate to stabilise global temperature rise at 1.5 degrees. It is a critical time for unions to demand action of business and governments.”

The Bangladesh Free Trade Union Congress reported on the direct occupational health and safety impact that extreme heat was having on workers in Bangladesh, who are already suffering from heat exhaustion as the climate heats up.

APHEDA facilitated a panel discussion entitled, Building Trade Union Power in the Energy Transition, showcasing examples of how unions in Asia were proactively responding the crisis and working to create good union jobs and collectively benefit from renewable energy.

APHEDA’s partner organisation, Sentro Ng Mga Nagkakaisa at Progresibong Manggagawa, shared how energy unions in the Philippines had recently formed a new federation, POWER. POWER is using the Resist, Reclaim and Restructure framework to take back democratic control of the country’s electricity system.

“This is our plan for energy democracy so the benefits go back to workers and we reclaim our resources to benefit the people. If we want real agreements, then it has to come from workers themselves,”

The Self Employed Women’s Association (SEWA), which has 1.9 million women members in the informal sector in India, also gave a presentation.

“Informal women workers are on the front-lines of climate change impacts in India. We are working with them to provide collectively-owned clean energy to all our members. This improves livelihoods and strengthens the rights of women.”

The General Federation of Nepalese Trade Unions and the All Nepal Trade Union Federation shared how unions were working with the progressive government of Nepal on the energy issues. The country is planning on using its large hydroelectric resources to become energy self-reliant and the unions are investigating how alternative business models can benefit workers and communities.