Unions in Myanmar call for establishment of Labour Courts 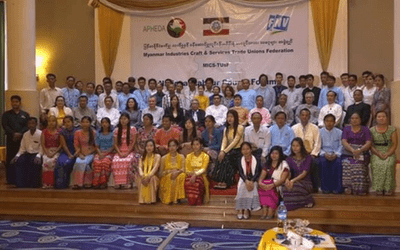 In late June 2018, Union Aid Abroad APHEDA’s partner organisation, the Myanmar Industries Crafts and Services Trade Union Federation (MICS) organised a national discussion onthe need for a role of a national labour court in Myanmar. The forum was a great success, bringing together unions, workers, employers and government officials to provide a critical review of the dispute settlement system.

MICS President U Maung Kyaing said the current system provided no protection for union leaders from being dismissed by employers.

He added that the country’s current labour arbitration councils are only about union registration disputes; not disputes with employers. U Maung Kyaing also emphasised the importance of the national forum to facilitate further discussion on the establishment of a Labour Court system in the context of improving dispute settlement mechanisms in Myanmar. Confederation of Trade Unions Myanmar (CTUM) President, U Maung Maung, said that unions must be consulted as social partners in the establishment of Labour Courts in Myanmar and in the general process of improving dispute settlement mechanisms.

This initial forum has resulted in a platform facilitating further exchange and discussion among the national unions in Myanmar. This will further strengthen the union movement position on dispute settlement mechanisms in Myanmar and the role of labour courts in this process.

Later this year MICS will organise a second forum with unions and advance these discussions.

Union Aid Abroad-APHEDA will continue to support unions in Myanmar throughout this process.