Unions and Peace in Aceh since the 2004 Tsunami 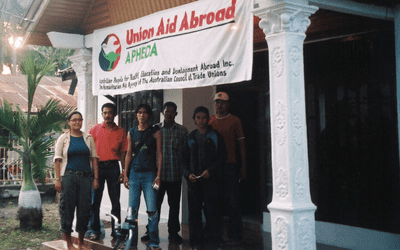 On Boxing Day 2004, Aceh was devastated by a tsunami which resulted in the deaths of over 168,000 people. Unions in Indonesia and around the world were quick to respond with emergency and rebuilding programs. Indonesian unionists created teams to go and help, clearing wells, running mobile clinics and building shelters.

The Australian and international union movement, through Union Aid Abroad – APHEDA was able to build on that, establishing an office to assist with rebuilding and with skills training. Part of the efforts were to rebuild the offices of WAHLI, the local Friends of the Earth. Working with the unionists who had survived the tsunami, we helped rebuild the local branches of Indonesian unions, and to establish new Aceh- based unions. Since 2005 we have been supporting local training, networking and advocacy for 28 unions in Aceh.

Peace and Unions after the Tsunami

In 2001, after decades seeking independence, the Indonesian government responded to a plebiscite held in 1999 by broadening Aceh’s autonomy. However the situation deteriorated and a State of Emergency was proclaimed in 2003. The troubles were ongoing when the tsunami struck. After the tsunami, the independence movement and Indonesian government negotiated peace based on a special status for Aceh. Elections to the Aceh parliament have been dominated by parties deriving from the Aceh independence movement. After much lobbying and advocacy campaigns by unions, Aceh adopted a labour code (“qanun”) in 2014.

After the tsunami, nurses established a new independent union in Aceh, Serikat Perawat Kesehatan Aceh (SPKA), separate from the Indonesian Nurses’ Association. SPKA is active within the local labour alliance.

The Trade Union Care Centre (TUCC) is an initiative that dates from around the time of the tsunami. The TUCC has been supported by German, American, Dutch and Australian unions, through Union Network International (UNI) Asia-Pacific region. The Dutch union federation FNV continues substantial support, to which Australian unions contribute.

TUCC brings together all unions in Aceh, in Alliansi Buruh Aceh, (ABA), the Alliance of Aceh Workers, for regular meetings, similar to a state union body here. 14 unions are on the board of the ABA, representing nurses, teachers, cement, metal, plantation, transport, construction, chemicals and postal workers. TUCC also provides training to build the capacity of unions and the skills of union activists, including on communication, negotiation and administration skills, political economy, workers’ health, gender rights, and labour law.

In recent years the Governor of Aceh issued decree No.49 about Exclusive Breast Milk Maintenance which gives maternity leave for six months, while the Indonesian national law provides for three months. In 2017 the Aceh unions won an 18% increase in the provincial minimum wage.

A future ‘favourable for change’

TUCC sees the situation with the Aceh government as favorable for change: “The socio-political conditions in Aceh are conducive” after the election in February 2017 of Irwandi Yusuf and Nova Iriansyah as Governor and Vice Governor until 2022.

TUCC wants to improve implementation of social security for workers and their families, enhance work facilities and occupational health & safety for workers in high risk sectors, and encourage the government to increase labour inspections of companies.

The chairman of ABA, Syaiful Mar, criticized the lack of enforcement from the Aceh Government regarding the Provincial Minimum Wage (UMP). The UMP has been set Rp 2.7 million (AUD $255) by the government of Aceh, but from monitoring, it is clear that only 40% of workers have this wage, since the government’s enforcement is still minimal. The supervisory teams in Aceh only have 26 people to monitor wages and work conditions in 4800 companies in Aceh.