United to Ban Asbestos in Vietnam and Indonesia 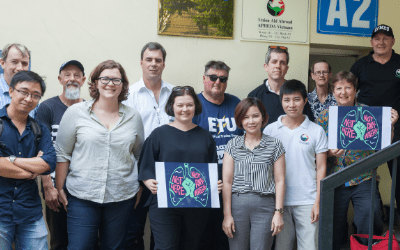 Union Aid Abroad – APHEDA took a team of 8 union leaders, activists and Global Justice Partners to Vietnam and Indonesia to observe and support the campaign to ban asbestos in those countries. Participants came from five different unions and included Lisa Chesters, Federal Member for Bendigo, Shadow Assistant Minister for Workplace Relations and Shadow Assistant Minister for Regional and Rural Australia. The team were able to share their Australian experience and their expertise in both campaigning to end asbestos and also the current challenges in Australia resulting from our legacy of asbestos use in our workplaces and communities.

‘From our experience in Australia, the use of asbestos is a triple tragedy. It’s a tragedy for people’s health – the cancers caused by exposure to asbestos are avoidable if countries stop using asbestos. It’s an environmental tragedy as old and degrading asbestos material is often disposed of in the environment where it can release fibres into the air when disturbed. It’s an economic tragedy as governments around the world have to bear the cost of this deadly industry’s clean up.’ Michael Wright, National Assistant Secretary, Electrical Trades Union Australia

Vietnam’s Campaign to Ban Asbestos: Hanoi and Nghe An

The Solidarity Tour began in Hanoi at Union Aid Abroad – APHEDA’s Vietnam office which has been operational since 2004. Activities in Vietnam included meeting with the Vietnam Ban Asbestos Network (VN BAN), government departments, Vietnamese Union leaders and activists who are leading the campaign to end asbestos use. The team also visited a project site in Nghe An province where houses with asbestos sheet roofing had received safe asbestos-free replacements.

One of the highlights was meeting with Madame An; a committed advocate for social justice, a leader in the movement to ban asbestos in Vietnam and a past member of Vietnam’s National Assembly.

The tour then travelled to Indonesia to experience the contrast between the campaigns between the two countries. The first activity in Indonesia was visiting and participating in Bandung Car Free Day where Union Aid Abroad – APHEDA’s partner organisation Local Initiative for OHS Network (LION) does community campaigning to raise awareness of the risks of asbestos and increase support for regional and national bans. The Car Free Day is a city government initiative that shuts down 6km of road and attracts tens of thousands of people to use the road by non-motorised means. LION had partnered with an association of local medical students who were giving locals free medical check-ups and using the opportunity to discuss the campaign to ban asbestos.

In Indonesia, activities included meeting with the local ban asbestos network members in Bandung city, members of the Indonesian Ban Asbestos Network in Jakarta and Indonesian unions. One of the most moving and interesting activities was the opportunity to meet with SERBUK Union members including current and former asbestos factory workers from different factories as well as the victims of asbestos related disease who are organising to be recognised and to win compensation. The tour participants heard from Sriyono, a former asbestos factory worker and the only person to have received compensation, and his wife Rumiyati who spoke about the impact of the disease on their family.

The tour met with the Australian Ambassador in Hanoi and the Deputy Head of Mission in Jakarta and used the opportunity to share their experiences from the tour and express the need for Australian support for the campaigns in both countries.

A successful tour brings about greater solidarity to ban asbestos!

At the conclusion of the tour, the team reflected that they had much greater understanding of the scale of asbestos use and the campaigns in Asia, as well as the political challenges and opportunities in each country. They said that they found it fantastic to feel like they were contributing to the campaign by bringing knowledge and skills from Australia, as well as the opportunity to express global solidarity in person. The tour was a great success and has created stronger bonds between the Australian union movement and our partners in global solidarity and the campaign to ban asbestos across Vietnam and Indonesia.

Help us make 2019 the tipping point for asbestos. Donate to our Ban Asbestos Appeal today!