Kate died at home in Sydney on 21 September after an illness. She was a staunch trade unionist, educator, internationalist and feminist. Kate grew up in modest circumstances in Blackpool in the north of England, trained as a teacher, and came to Australia in the early 1980s. ACTU president Michel O’Neil sent a message to the funeral, read out by former Textiles, Clothing and Footwear Union of Australia (TCFUA) union leader, Anna Booth: 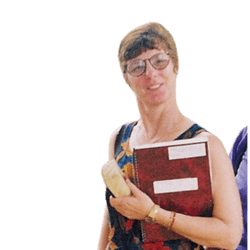 “She started working in Australian unions for what was then the Administrative and Clerical Officers’ Association (ACOA, now CPSU). I met Kate at the TCFUA. She was a feminist, fierce and funny…  She was instrumental in designing and delivering, along with her good friend Jill Brookes, ground-breaking union delegate education. She understood worker education was fundamentally about class and power. Giving workers confidence, the capacity to analyse, to learn from history and strategise to win collective power. “

At TCFUA, Kate not only built union education but was also a pioneer in the delivery of English in the workplace courses that brought workers’ health and labour rights education to migrant workers in the clothing and textile industries. She worked closely with Asian Women at Work.

Michele O’Neil remembered that “Kate was not someone who sought public recognition or praise. She worked hard all her life, always with a focus on building up and educating others. A comrade and champion of working people…”

“She was an Internationalist. A strong supporter of APHEDA the global justice organisation of the Australian Union Movement. In the 90’s Kate travelled to South Africa to assist the South African Union movement develop a new system to recognise and value skills with fair pay.”

pioneering union education across all the unions and federations in the 1990s. Her contribution to Mekong union building, workers’ health, workers’ rights and women’s rights was very significant. She will be remembered for her outstanding union education work in Australia and other countries.

Kate worked for many years for TAFE, teaching human resources, industrial relations and occupational health & safety. She was dedicated to public and working-class education, and was a much loved and respected teacher.

Kate remained a passionate supporter of Union Aid Abroad -APHEDA. Thanks to those who made donations in her honour.