The Russian Federation, supported by a small group of other countries, have once again blocked a decision to list chrysotile asbestos in the Rotterdam Convention during the ongoing 10th Conference of Parties held in Geneva. The listing would have provided importing countries the ‘right to know’ if products contain chrysotile asbestos.

It comes just four days after all International Labour Organization (ILO) member states took the landmark decision of adding the principle of a safe and healthy working environment to ILO’s Fundamental Principles and Rights at Work.

APHEDA was represented at the convention by Ajat Sudrajat, a project officer from our partner organisation Local Initiative for OSH Network (LION). He said: “What happened at the Rotterdam convention will not change the fact about chrysotile asbestos is a hazardous material which is responsible for killing more than 200,000 lives every year.” 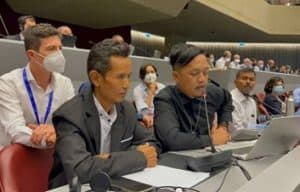 Mr. Sriyono and Mr. Sudrajat speaking during the plenary.

Mr. Sudrajat accompanied asbestos disease sufferer, Mr. Sriyono who worked for more than 25 years in an asbestos textile factory in Indonesia, which produces thermal insulation and gland packing using chrysotile as raw materials. He has been diagnosed with asbestosis.

Mr. Sriyono presented a powerful testimonial to country members during the plenary and at a side event organised by the Australian Council of Trade Unions and Solidar Suisse. He said: “Working without adequate personal protective equipment, asbestos sacks are lifted, and emptied by hand. Our work clothes are taken home to be washed, we eat, drink and rest in areas where asbestos is produced. Not many people know about this terrible condition because there is no information and public access to know that the materials used are toxic and harmful to human health.

“Let me bring myself as a crystal clear message for dangerous toxic chrysotile,” he said. “Today, I represent my friends who are exposed to asbestos disease, to call for solidarity that the problem of asbestos is not limited to traded industrial materials, but also health and human rights. Stop saying that asbestos is a safe material, it’s just a myth.”

Even if quick action were taken, the world will struggle with the asbestos legacy for decades to come. To continue to refuse to the right to know about the asbestos threat to workers and communities around the globe is not only cynical and short-sighted, but it now also constitutes a gross violation of a fundamental human right. 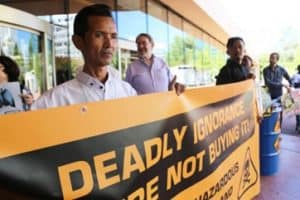 Mr. Sriyono and Mr. Sudrajat protesting outside the conference demanding an end to the trade in asbestos.

“We have spoken to the world and will continue to raise our voice,” said Mr. Sudrajat. “Fighting for justice for the victims and their families, increasing our campaign for everyone’s right to a healthy and safe workplace, as a human right for all.”

“A healthy and safe workplace as a fundamental right must become a reality. No more sacrifice of lives due to the deadly asbestos trade, for the ignorance, greed and profit of only a few,” he said.

The battle to modernise the convention moves to COP11. Support is building to end the blocking tactics of a small number of Parties who continue to undermine the Rotterdam Convention.

Union Aid Abroad-APHEDA has worked with Local Initiative for Occupational Safety and Health Network (LION) Indonesia since late 2015. This education and campaigning organisation is based in Bandung, West Java and plays a key role in the pursuit of banning asbestos importation, manufacture and widespread use across Indonesia. A founding member of INA-BAN, Indonesia’s Ban Asbestos Network, LION has been a key player in the Union Aid Abroad – APHEDA’s Asbestos. Not Here. Not Anywhere. campaign across Southeast Asia.