What has CoPower achieved since Shell bought out PowerShop?

CoPower is a not-for-profit household electricity provider. One year ago, multinational oil and gas company Shell announced they were buying out Powershop. The news of the fossil fuel behemoth taking over the “green” energy provider shook many energy users into action. Households took a stand against this climate-wrecking corporation with a dubious human rights record and the corporate model which allowed it to happen. 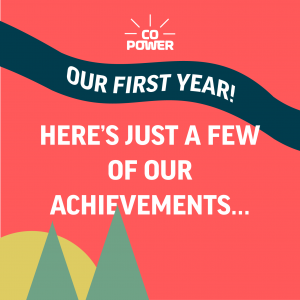 Hundreds of households saw the opportunity that a not-for-profit cooperative offered and switched their electricity to CoPower.  Together this movement has been building a new commons to ensure our electricity system works for people and our precious planet.

The last 12 months has been massive for CoPower. Together we have:

Looking ahead to next year we face many challenges. The impacts of the climate crisis continue to shape our daily lives with extreme flooding continuing to threaten many communities across the country. While world leaders have gathered at COP 27 in Egypt, fossil fuel use globally continues to increase and current pledges have the planet set to overshoot the 1.5 degrees Celsius “safe” target by far. The cost-of-living crisis continues to skyrocket. Fossil fuel corporations are extracting mega profits from households while paying little to no tax. Policy makers continue to subscribe to austerity as the solution, which hurts workers and is felt most by the vulnerable.

There has never been a more important time to build a future that works for people and the planet. Households are joining together and switching their electricity to CoPower to build a new commons.