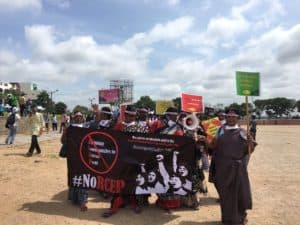 Recently Union Aid Abroad participated in a round-table discussion about trade agreements and impacts for women with visiting activists Nazma Akter and Kate Lappin from Asia Pacific Forum on Women, Law & Development (APWLD). ‘Trade liberalisation’ while challenged by unions and social movements, remains the dominant approach to trade amongst governments the world over, with devastating impacts for the poorest women workers in the poorest countries.

Here’s a few things we learned:

Women are well known to be higher users of public services and goods such as health and education services – in part, due to caring responsibilities for children and older people as well as their own reproductive health service needs. Trade liberalisation promotes an approach which reduces government revenue (eg lost income from trade taxes or tariffs) with corresponding cuts to public services. Further, privatisation of government-owned services is actively promoted under trade liberalisation and as we know, this leads to cuts in services, job losses and more precarious (casual or short-term contract) jobs.

Governments often argue that trade liberalisation means higher wages and conditions for workers in export industries. However export-oriented businesses seek lower wages and conditions to remain competitive and often seek women workforces which are easier to exploit in part because women have less work options than men in poorer countries. Think the massive garment and textile manufacturing industries established in Bangladesh, Myanmar, Cambodia and Vietnam, all dominated by younger women workers. In addition, multi-national corporations outsource production to lower wages countries and lobby governments to set up Export Processing Zones (EPZs) for manufacturing. Governments wanting foreign investment, grant tax breaks, often with no rights to organise unions in the zones. Women make up the majority of workers in the EPZs of the developing world.

In the ASEAN region alone, at least 300 million people rely on small-scale subsistence agriculture for a meagre living or in many cases simply to survive. Women farmers are more likely to work in small-scale agriculture. Trade liberalisation has jeopardized the livelihoods of millions who depend on the land. Corporate agric-businesses fight for market access in poorer countries – by demanding the removal of non-trade barriers such as governments regulations on ownership of land, often resulting in ‘land grabbing’, a practice operating across Asia, with local farmers pushed off land with no recourse or compensation.

Further, when barriers to agricultural trade in poor countries are removed, it can lead to import surges in times of glut and production from countries like Australia – which displaces local food production. A reliance on imported food means that in times of scarcity there is not enough local supply and food prices skyrocket producing hunger, and food scarcity.

4. Restrictions on generic medicines impacts women and children most

Large pharmaceutical corporations use trade agreements to push for intellectual property rights that restrict the production and supply of cheaper generic medicines. Poor countries depend on generic, more affordable drugs to manage health needs of their populations. Women who already hold far less of the global wealth (approximately 30% globally) compared to their collective productive contribution, cannot affordable more expensive medicines, necessary for their own reproductive and general health and that of their children. This is particularly so for women in the poorer Global South.

5. Campaigning for transparent trade agreements that includes participation of unions and women’s organisations

In our united campaign for transparent and participatory trade agreements, we need to distinguish our movement demands for workers-of-the-world and the global environment from narrow nationalist protectionism promoted by countries of the Global North like Australia, aimed against workers in poor countries. We need new fair trade agreements whose primary purpose is to entrench worker’s rights, environmental sustainability and put women’s equality at the centre. This is becoming even more urgent with the new Asia-wide Regional Comprehensive Economic Partnership (RCEP) trade agreement which also includes Australia. For more info on the RCEP, see www.aftinet.org.au

For more information and a source for this article, here’s a great read from the London-based Gender and Development Network: http://gadnetwork.org/gadn-news/2017/7/4/new-gadn-briefing-making-trade-work-for-gender-equality

Thanks to ActionAid Australia and Public Services International for hosting the round-table.