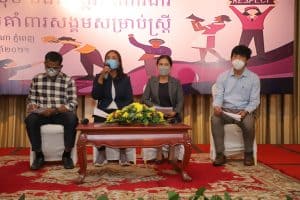 In 2020-2021, partner unions conducted a gender and power analysis, exploring the ways that their own organisational structures, policies and procedures might limit women’s full participation within the union. Then they conducted a needs analysis of women union members. This year, based on these analyses, the partner unions have been implementing gender equity initiatives to strengthen gender equality and women’s rights within unions for staff and members.

Some highlights of these initiatives include increased levels of consultation with women workers by the BWTUC, which has established women’s committees inside Cambodia’s notoriously abusive brick kiln industry factories and allocated 20% of its budget to women-specific programs and activities.

IDEA established a National Women’s Committee in May this year, made up of women representatives from each of the sectors represented by IDEA. It will highlight women workers’ issues and encourage women’s leadership development. To extend this, IDEA also has plans to establish local-level women’s committees over the course of the next year. The leadership has also revised its statutes to ensure that it is inclusive and backing this up with a quota for women in leadership positions at all levels.

CFSWF is continuing its focus on gender awareness training and has developed a gender awareness manual and a matching toolkit that can be used for members who don’t read and write. They are also setting up ‘Women talk to Women’, a group where women from civil society organisations and unions can talk about women’s issues. CFSWF has also allocated 30% of its own budget to women’s initiatives, programs and activities.

Through gender equity plans, BWTUC, IDEA and CFSWF along with other unions collaboratively held the Global 16 Days of Activism. This was one example of increased awareness raising on gender-based violence at work and about 200 union members attended.

Progress is also underway with the needs assessment of women members. So far, they have nominated occupational safety and health issues such as access to safe toilets and washing facilities and safe accommodation, prevention of workplace violence and harassment, and women’s access to the National Social Security Fund (NSSF). Access to the NSSF for women was selected as the theme for a joint campaign, commencing with a high-level dialogue workshop in Phnom Penh with representatives from government, unions and civil society debating the barriers to access to social protection for women, particularly women in informal or precarious jobs.

Women Worker’s Rights through Stronger Trade Unions project has one more year to go in its current phase. During this time, Union Aid Abroad – APHEDA will continue to support union partners to continue with their current gender equity plans. At the same time, supporting another round of gender equity reflection and review to build capacity and institutionalise gender analysis as a regular part of union planning and organising. Union Aid Abroad APHEDA will also continue to promote union unity, bringing key unions together to collaborate on issues that are of shared importance.