Woodside backs down after criticism over presence in Myanmar 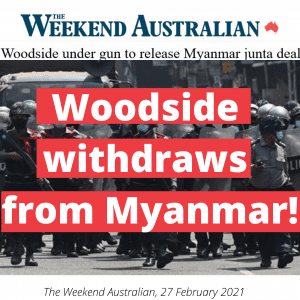 reat news! Australian energy giant, Woodside, has bowed to pressure and shown leadership when it announced it was withdrawing from its presence in Myanmar.

On Saturday 27 February, an article was published in The Australian newspaper which outlined the pressure Woodside was under to withdraw from Myanmar under the rule of the military junta.

By Saturday afternoon, Woodside announced that it was reducing presence in Myanmar and The Australian had changed its headline to ‘Woodside to pull out offshore drilling team amid Myanmar unrest’.

This is welcome news and Woodside’s decision should be followed by all multinational gas and mining companies, including Australia’s Myanmar Metals, Transcontinental Group, ROC and Tap Oil.

Communities from Myanmar living in Australia are overwhelmingly opposed to  the military coup. Perth (the home town and headquarters of Woodside) has one of Australia’s biggest Myanmar diasporas. 3,000 people from Myanmar rallied in Perth last week. With campaign plans set to escalate and intensify the pressure on Woodside, the company has made the right move to ‘de-mobilise’ its team in Myanmar.

In a press release announcing Woodside’s withdrawal, Clancy Moore from Publish What You Pay said

“We welcome Woodside’s decision today to withdraw from Myanmar following considerable pressure from Australian and Myanmar civil society over the last week…. We call on other gas and mining companies to follow Woodside’s lead and choose the people of Myanmar over the military generals. This includes multinationals Chevron and Total and Australian companies Myanmar Metals, Transcontinental Group, ROC and Tap Oil.”