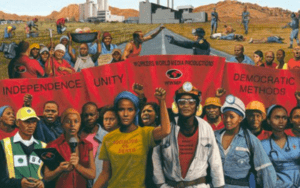 Labour voices on the airwaves

Workers’ World Media Productions (WWMP) was established in 1999 and quickly positioned itself as a non-profit labour media production house, working in democratic partnership with the South African trade union federations. Its main office is in Kayelitsha township, near Cape Town. Union Aid Abroad-APHEDA has been working with WWMP since 2009. WWMP runs weekly programs on 40 community radio stations in five languages. The programs cover:

In recent years, WWMP has been educating working people across southern Africa about the issue of decent work and living wages. From 2012 there have been long, hard-fought strikes by mainly women farm labourers in the Winelands of the Western Cape, initially demanding AU$14 per day, with many workers dismissed and some jailed. The stakes are high, since so few people in South Africa have formal work, living costs are high, and poverty is increasing.

WWMP conducted thorough audience research which indicated that the biggest listenership of the labour radio programs were informal, marginalised and unemployed workers, mainly black, working class women. This is a group of workers that has grown significantly as a result of neo-liberalism and the growth of informal economy workforces. Neoliberal policies have impacted on the working class by undermining people’s capacity to build and organise. The socio-economic impact has resulted in people being stuck in survival mode and having very little time to resource and organise themselves. This research has seen WWMP shift towards a more community-based approach, especially in poor and marginalised communities.

From airwaves to television and mobile Apps: Worker’s World labour show and Elitsha

In 2008, WWMP was instrumental in developing and establishing Cape Town TV (CTV), a community TV channel. Since then WWMP has been successfully producing and broadcasting a weekly labour TV show which reaches a very large audience.

This was followed by the publication of a free multilingual community newspaper about working class issues, Elitsha. The publication is now available online and can be received instantly via downloadable mobile phone Apps in both English and Xhosa.

Recent changes in the South African trade union federations have seen a new federation being established, the South African Federation of Trade Unions, (SAFTU), whose largest member is the National Union of Metalworkers of South Africa (NUMSA). SAFTU is represented on the board of WWMP, which has been assisting unions with capacity building of shop stewards.

WWMP has been assisting the establishment of the National Union of Care Workers of South Africa (NUCWOSA). The union was officially formed in November 2016 when 80 care workers from all nine provinces gathered in Johannesburg. The union covers all community care workers in both public and private sectors, including child care workers.