World Congress of the union movement comes to Melbourne 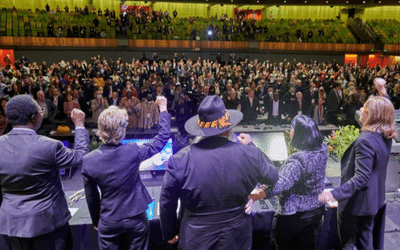 At the congress opening in Melbourne. Photo: ITUC.

The 5th International Trade Union Confederation (ITUC) World Congress was held in Melbourne from November 17-22. Over the 5 days, more than 1000 unionists discussed organising for climate-friendly jobs, workers’ rights, just wages, social protection, equality and inclusion. ITUC represents over 207 million workers in over 300 national federations in 165 countries. It is the largest democratic organisation in the world.

During the congress, to promote international union solidarity, APHEDA organised a number of events. In conjunction with Philippines Australia Union Link (PAUL), APHEDA organised a forum called ‘Philippine unions under President Ferdinand Marcos Jr – what do workers face?’ Representatives from trade union organisations Sentro, the Federation of Free Workers and Kilusang Mayo Uno spoke about the recent election and the continued repression of unionists. 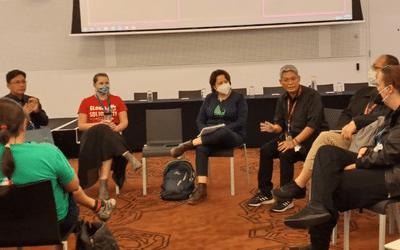 Discussing the political situation in the Philippines at a forum co-organised by APHEDA.

APHEDA also organised a forum in conjunction with the Australian Council of Trade Unions and ITUC, called ‘Building resilience under oppression: Dialogue with exiled trade unionists from Myanmar, Hong Kong, Afghanistan and Belarus’. This forum featured a panel of unionists who have been exiled because of their union work, speaking about their experience living under repressive governments.

Many APHEDA supporters were pleased to welcome the representatives of our partner organisations to Melbourne at a social event of over 90 people that was sponsored by Maurice Blackburn lawyers and hosted at the UWU offices.

Prime Minister Anthony Albanese received a standing ovation when he announced to the congress: “The Labor government will table in the Parliament of Australia ILO Convention 190 … affirming the right of every person to a work culture based on mutual respect and dignity. It will be the first formal step towards ratification. No women should have to choose between her job and her safety.” 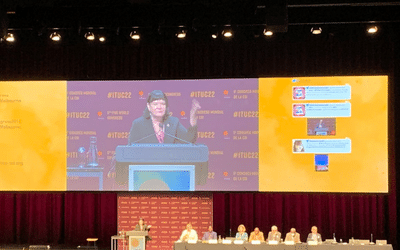 Unions globally have been campaigning for governments to ratify ILO Convention 190 and commit to concrete strategies with trade unions for the prevention of sexual violence and gender-based violence in the world of work.

Australian unions have helped make great gains recently in this area, not least being the Respect at Work report and implementation of its recommendations. The global union movement continues the struggle everywhere to eliminate gender-based violence in the world of work.

We acknowledge and honour the tremendous leadership of former ACTU President, Sharan Burrow in her roles within the global union movement.