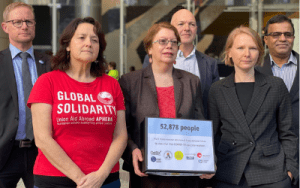 Union Aid Abroad – APHEDA, together with the Australian Council of Trade Unions (ACTU), AFTINET, GetUp!, Amnesty International Australia, Public Services International (PSI) and the Humanism Project, have been campaigning for Australia to take immediate action and support South Africa and India’s original proposal at WTO for a temporary waiver on trade rules to increase global production and provide fast access for all. On 7 June 2021, a petition signed by more than 50,000 Australians was handed over outside the Department of Foreign Affairs and Trade (DFAT) in Sydney.

In October 2020, India and South Africa brought the waiver proposal to the Trade-Related Aspects of Intellectual Property Rights (TRIPS) Council Meeting of the World Trade Organization (WTO). TRIPS is an international treaty which regulates intellectual property rules. Since the proposal was made, Australia has opposed it and delayed the resolution of the matter. Australia has been part of a small block of rich countries pandering to the interests of big pharmaceutical corporations to delay this measure.

Meanwhile, countries from the global south were quick to support the waiver.

Sustained campaigning, led by health workers and communities on the frontline of the deadly and increasingly unequal global pandemic, saw a massive win in May this year, when the Biden Administration, along with New Zealand, publicly came out to support the waiver.

While this has tipped the balance in favour of the momentum, Big Pharma, set to lose 20-year exclusive patents and phenomenal profits, have responded with their armies of lobbyists treading the halls of power the world over. This is ever present in Australia. Australia has moved from openly blocking and delaying this crucial global public health measure, to sitting on the fence instead of backing the path set by the US and New Zealand.

The petition called on the Australian Government to:

Here’s the Facebook Live Video from the media event:

Here are some quotes from the Media Release:

“This last year the pandemic has claimed the lives of millions, and has brought societies and economies to their knees. This initiative would bring essential healthcare to those who need it most and kick start the recovery process. 100 countries around the world support this proposal to suspend intellectual property rights on COVID vaccines. It’s time Australia does too.” Michele O’Neil, President, ACTU

“With more than 3.7 million deaths already, Australia must show leadership to save lives. The world needs the TRIPS waiver now to make vaccines accessible and affordable to all. The Australian government must stop blocking the waiver and support the revised proposal from South Africa and India!”.Kate Lee, Executive Officer, APHEDA

“WTO rules for 20-year patent monopolies give control of vaccines and treatments to pharmaceutical companies, delaying access for most people in low-income countries until 2023. Millions will die while pharma companies make billions. The temporary waiver of WTO rules will increase global production and provide faster access for all.” Dr Pat Ranald, Convenor, AFTINET

Sustained pressure in Australia has forced the Morrison Government to move off the fence. At the formal TRIPS Council Meeting in Geneva on Tuesday 8th and Wednesday 9th June, Australia importantly supported text based negotiations for South Africa and India’s original proposal. However Big Pharma has been pushing back in the form of an EU counter proposal which, unfairly, is attempting to be negotiated alongside the original trade rule waiver.

TRIPS council meetings and text based negotiations are continuing over the next month ahead of the next WTO General Council meeting on 27 and 28 July. It is crucial that rich countries, such as Australia, take a proactive approach to fully support the waiver on trade rules. Time is running out. More people have died of COVID-19 this year than last. Increasingly the deaths are occurring in the global south. Heads of state and UN leaders have warned of the “vaccine apartheid” engulfing the world. Despite the rhetoric, the recent meeting of the G7 failed to garner anywhere near the response required in terms of global vaccine distribution. The policy response required from rich countries is not “charity”. Rather, it is just a matter of stamping out greed and enormous profiteering by Big Pharma who have relied of publicly-funded research to produce vaccines.