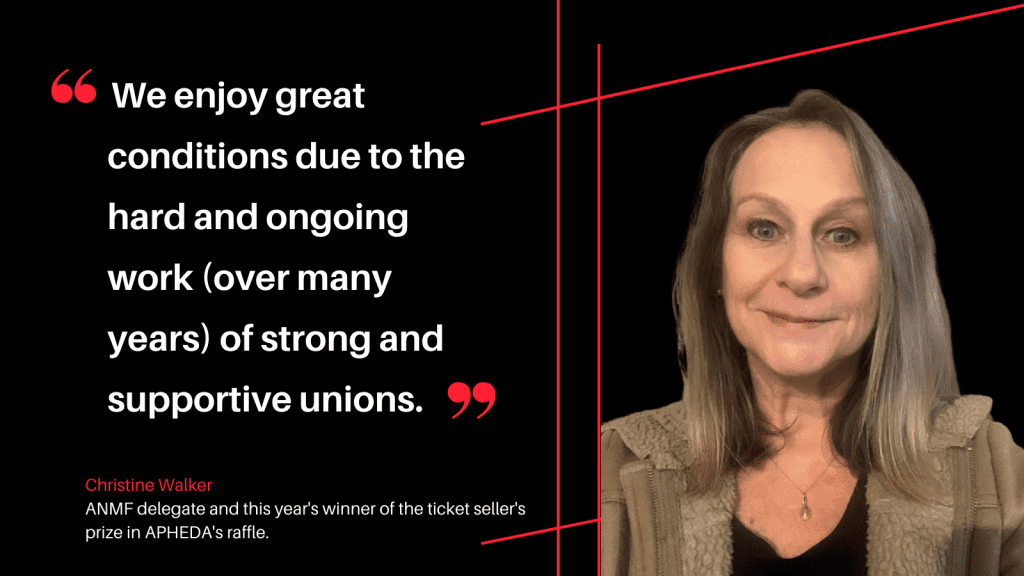 Christine Walker is an Australian Nursing and Midwifery Federation delegate and APHEDA supporter. This year she won the ticket seller’s prize in our annual raffle. This prize goes to the person who sells the most tickets and the winner is awarded with a $500 voucher to Gleebooks, one of Australia’s best-loved independent bookshops.

How did you become aware of APHEDA?

I am a Registered Nurse and first became aware of APHEDA when I became a union job rep in my workplace around 2015. I have always been an advocate for fairness and equity within a workplace at both the micro and macro levels.

Why did APHEDA’s work speak to your belief in workplace equity?

It helped me understand that workers abroad do not share the same conditions and remuneration that we are lucky enough to have here in Australia.  We enjoy these great conditions due to the hard and ongoing work (over many years) of strong and supportive unions in our country.

What’s your approach to selling so many raffle tickets?

When the APHEDA raffle comes around annually I try to sell as many tickets as possible to make sure people have a chance to not only win great prizes but to increase awareness of the APHEDA organisation and its ongoing projects. APHEDA has recently had a fantastic victory in ensuring recovering lost wages for underprivileged workers who were earning less than $1 an hour working for multinational companies like Starbucks and Disney. This is just one example of many great projects. https://www.apheda.org.au/brands-pay-exploited-workers-in-mae-sot/

What are some helpful hints you’d give to others hoping to help out in a similar way?

I found that people were more likely to buy tickets by scanning a QR code on their phone than buying a physical ticket.   I think this is helped by how familiar people are with QR codes now. I photocopied multiple copies of the sheet with the QR code, made sure my name was on it as referrer and distributed these around my two workplaces at Peninsula Health and Peninsula Private (both in Frankston). The e-bike as first prize was particularly appealing to people.

Most importantly, what’s your plan for the prize?

I was thrilled to win the book seller’s prize of $500 to spend on books from Gleebooks.  Biographies, travel and cookbooks will use up most of my voucher I think.

Are you planning to keep selling raffle ticket next year and beyond?

YES! My aim for future raffles will be to once again spread the word of the wonderful work APHEDA does whilst trying to sell as many tickets again as possible. My hope is to one day sell a winning ticket!