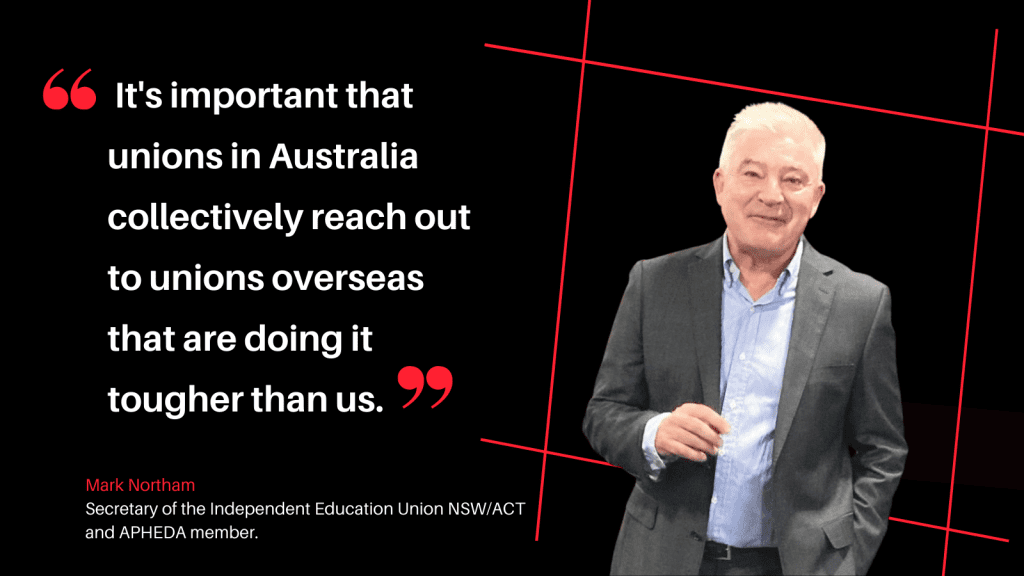 Mark Northam is the Secretary of the Independent Education Union NSW/ACT and has been a member of Union Aid Abroad-APHEDA for 20 years.

I feel an obligation to not only work within my union, but more broadly across Australia. I respect the work APHEDA does and it seems such a small thing to give a monthly contribution to keep your projects going.

In terms of recent discussion about our role in Asia, it’s even more important that unions in Australia collectively reach out to other unions that are doing it tougher than us. So we can assist them collectively for the benefit of all workers.

What part of APHEDA’s work do you feel most connected to or proud of?

Historically, it would be the work in Timor Leste. After independence, our union sent some delegations over there. We were assisting with schools, and we had some of our staff members working over there for a period of time. That sparked my interest because we had a focus on education and getting some assistance into the schools.

The other one that resonates with me right now is the project in Vietnam supporting more women being elected to parliament. I’ve been to Vietnam a couple of times and, when I was a classroom teacher, I put together some teaching resources for schools over there to use. So, I’ve got an affinity with the place, I think that’s the epitome of a really useful program that union members in Australia can understand.

When I was an organiser, it was making sure that those individual matters that were so important to members were attended to. Growing out of that, importantly, being able to take industrial action on a large scale and we’re doing that later this month. As we speak, we’re balloting some 17,000 Catholic systemic school members across New South Wales and the ACT. And it’s highly likely that we’ll end up in industrial action where we put those people on the streets to get some enhanced salaries and additional time release for teachers and trying to grapple with the teacher shortage problem.

One thing which is critical to successful unionism, is getting mass collective action every few years to drive home and get particular and long-lasting improvements.

The other dimension is improving policy directives. One that is close to my heart would be social housing. Those public policy settings come off the back of the work of all unions. I think the provision of social housing is such a critical thing right now.

Why is building this kind of internationalism amongst unionists in Australia so important?

I think unions are a force of social good. They make things better for everyone by providing long service leave, sick pay, safe work conditions. They’re all things that make people’s experience of going to work better.

I think unions would say that democracy is a very good thing. If we can work through APHEDA and support the development of trade unions in other countries, then that’s a positive step.

UPDATE: 18,000 teachers and support staff across 540 Catholic diocesan schools in NSW and the ACT participated in a full-day stop work on 27 May. Large rallies took place in Sydney, Canberra, Wollongong, Newcastle, Tamworth and many other regional towns.

The IEU has promised further industrial action if their demands for increased pay, more planning time and less paperwork are not met.