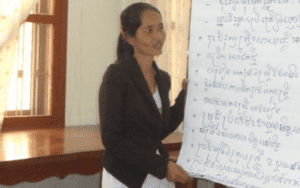 Union Aid Abroad-APHEDA is about people – people working together to make things better for all. As the global justice organisation of the Australian union movement, each and every APHEDA supporter, member, partner, activist and participant here in Australia and all around the world contributes to the work it takes to tackle inequality and injustice. This month we speak to Dyna, team leader at the Cambodian Prostitutes Union (CPU). Dyna recounts her journey from sex worker to union leader, supporting marginalised women and campaigning for the decriminalisation of sex work in Cambodia.

How long have you been working with the Cambodian Prostitutes Union (CPU) and what is your role?

I have been working with the Cambodian Womens Development Agency (CWDA) and Cambodian Prostitutes Union (CPU) since 1998. I am now a team leader at CPU which has 15 part-time and full-time staff including 11 peer educators.

Being union is important to me because it gives me an opportunity to lift and rehabilitate myself to live a life of dignity together with my fellow members. It is also important because I can help lead and support the most marginalised women – sex workers – unite them and, through CPU, provide necessary support such as health care services, legal support, education, and safe work environments. Being in a union also helps us link up with other unions and networks to run collective campaigns for sex workers rights to organise, access to social services, how to operate in safe environments and the right to a livelihood.

What does APHEDA mean to you?

Union Aid Abroad-APHEDA helped me rebuild my life from working as a sex worker to becoming the leader of a union. APHEDA also helped establish CPU and it has been providing financial, technical and moral support to CPU since its establishment. Therefore, we consider APHEDA as one of our prominent partners and supporters of this good cause in Cambodia.

What part of your work are you most proud of? Why?

I am most proud of the recognition I have received within the union movement as a leader and proud to have been elected as chairperson of the National Entertainment Workers Network (NEWN), despite the stigma and discrimination that is often  associated with sex work – my past profession and the profession of the women my union represents

I am also proud that I could take part in reducing the incidence of HIV/AIDs in Cambodia. I have actively campaigned with CPU/CWDA to run HIV/AIDs camps, to provide education and awareness to Entertainment Workers so that they can reduce risks e.g. by using condoms correctly. I have also been a part of ensuring that the Entertainment Workers and Sex Workers get HIV/AIDs tests, general health checks and treatment regularly, as well as operate in a safe environment by reducing the cases of violence against them. I am involved in negotiating with the law enforcement agencies and assist with legal avenues to free sex workers when they are caught (prostitution is considered a criminal activity in Cambodia). I consider this an important part of my work.

In my role, I have opportunities to network and campaign together with other women’s rights activists in Cambodia and internationally. I have also had opportunities to travel to many countries including Thailand, Italy, Nepal, Myanmar, Laos and Switzerland as well as share experiences, learn and establish links with activists in these countries on issues concerning the exploitation of women and children, HIV/AIDs and the elimination of discrimination against women.

What do you see as the work (areas, issues, etc.) that is most important for CPU to focus on into the future?

One of the key areas for CPU’s future focus is increasing its membership base, increasing and diversifying supporters to bring in more funding and to cover larger areas. We also consider it important to continue our fight for legalising sex work in Cambodia, together with other networks such as Women Network for Unity (WNU). Equally important is to provide education to sex workers as many of them are illiterate, and to ensure their children have rights to education in schools, without discrimination. Many sex workers do not have identity cards which deprives them of access to essential and necessary services. Securing their identity papers is a priority so that sex workers can establish their identity, and obtain legal recognition and access to essential services.

Australian unionist support of Union Aid Abroad APHEDA is vital because your financial support helps develop unions abroad and also helps alleviate poverty of workers and communities. Your solidarity helps us to establish rights and justice for marginalised people. APHEDA, through its overseas work, helps realise our global solidarity objectives by supporting workers and communities internationally to live a life of prosperity and dignity.