Is Australia’s foreign policy on Myanmar about to change?

In the 15 months since the 1 February coup in Myanmar, Australia has deferred to an ASEAN-led solution and quiet diplomacy. But Australia’s new government could mean significant changes in foreign policy on Myanmar.

Newly appointed Foreign Affairs Minister Penny Wong and the Australian Labor Party have strongly advocated for the use of the Autonomous Sanctions Amendment (Magnitsky-style and Other Thematic Sanctions) Act 2021 in response to the serious violations and abuses of human rights and international humanitarian law in Myanmar.

Myanmar Campaign Network (MCN) calls for immediate targeted financial sanctions, travel bans, and visa bans on senior military officials and their families, as well as sanctions on military-owned conglomerates and their subsidiaries.

Protecting the rights of women and girls

Senator Wong announced last month that at least 80 percent of Labor’s spending will support gender issues like tackling violence against women and girls.

This increased support is vital in Myanmar because 52% of the 900,000 estimated internally displaced persons are women and girls. This vulnerable demographic are more at risk of rape and sexual assault, human trafficking and exploitation. According to OCHA, human trafficking in conflict-affected areas is expected to surge in 2022, having already risen last year.

Ethnic women’s organisations, including Union Aid Abroad-APHEDA’s partner the Karen Women’s Organization, have invaluable experience in providing assistance to conflict-affected populations through networks that have been developed over decades. MCN calls for increased humanitarian aid and diplomatic support for women civil society organisations in border communities, to carry out cross-border humanitarian efforts.

Limitations of working through ASEAN

Labor has committed $470 million of additional foreign aid to the South East Asia region. Labor has also committed to appointing a South East Asia Special Envoy, a high-level role that would sit above the existing role of ASEAN ambassador.

Senator Wong has indicated that Labor aims to increase regional engagement with ASEAN. These initiatives are very welcome.

However, the ASEAN 5 Point Consensus has been widely criticised as a failure. The junta has refused to comply with its commitments, including the cessation of violence and humanitarian aid.

Additionally the $5 million in humanitarian aid that Australia distributed through the ASEAN Coordinating Centre for Humanitarian Assistance on disaster management has been criticised for lacking independence from the Myanmar junta.

The recent Consultative Meeting on ASEAN Humanitarian Assistance to Myanmar on 6 May has been criticised for the inclusion of junta representative, Ko Ko Hlaing, Chairman of the junta’s Myanmar Task Force, and the exclusion of other vital stakeholders including National Unity Government (NUG) and the International Committee of Red Cross (ICRC).

This is highly problematic as the junta has blocked humanitarian aid since the coup.

MCN calls for the new government to continue high-level engagement with the National Unity Government, and coordination with ethnic health networks for the distribution of humanitarian aid.

The work of the MCN 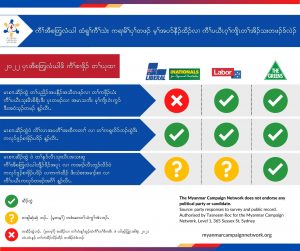 For the past 15 months, MCN has campaigned for the introduction of targeted sanctions against senior military leaders and military-owned entities, the recognition of the legitimate government, the NUG, and the reinstatement of civilian government in Myanmar.

In the lead-up to the May federal election, MCN held a public webinar event to explore the foreign affairs priorities of the three major parties regarding Myanmar. The event was a deep-dive into targeted sanctions, NUG recognition, humanitarian assistance, COVID-19 response, and the role of ASEAN.

The MCN also published an election scorecard to inform voters of the positions of the three major parties. MCN congratulates the Australian Labor Party on its election win and Senator Penny Wong on her appointment as Australia’s Foreign Minister.

The Australian Labor Party has made a commitment to support democracy and human rights in Myanmar. MCN calls for the immediate application of Magnitsky-style sanctions on the Myanmar military and its conglomerates, and high-level engagement with the NUG as Labor assumes leadership of the Australian government.