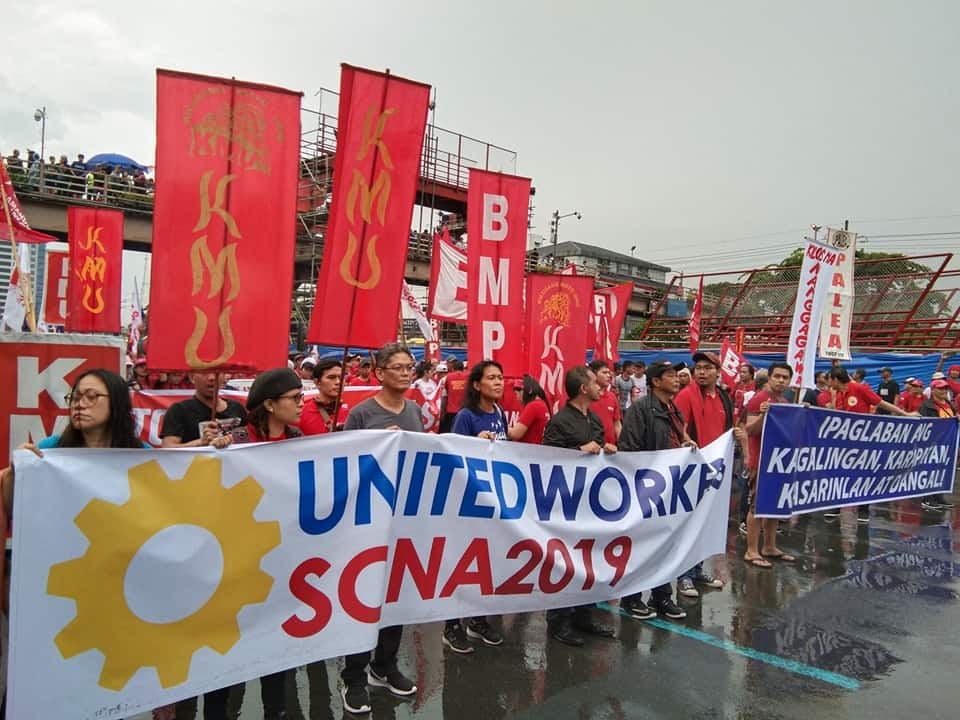 In the Philippines, the fight for a dignified wage and secure work has geared up, as Union Aid Abroad – APHEDA’s partner union, Kilusang Mayo Uno (KMU), campaigns to end sham contracting and unites with other unions for a living wage.

Workers’ rights under attack in the Philippines

Since last year, a united union front made progress in forcing President Durtere to commit to fixing the crisis of precarious work. Durtere, however, has not delivered on his promises, and the recent mid-term elections have only strengthened his political power.

NutriAsia workers join the crowd of 30,000 at Commonwealth Ave to proclaim the real State of the Nation, charging the Duterte regime for its failure to end contractualization and uphold labor rights.

Union repression is on the rise in the Philippines, with the murder of union leaders increasing.  This has led the International Trade Union Confederation to rate the Philippine’s as one of the worst ten countries for workers’ rights globally.

In the 2019 ITUC Global Rights Index report, it states:

Workers and trade unionists in the Philippines faced violent attacks and intimidation. Protests were brutally repressed by police forces in an attempt by government forces to suppress political dissent. With martial law in Mindanao extended for the third time until the end of 2019, the threat of an escalation of violence and abuses grows.

In a united show of strength, Filipino trade unions have taken to the streets under the banner of ‘United Workers’ to condemn Duterte’s anti-worker government and assert their demands for good jobs, living wages, and respect for labour and human rights.

The protest coincided with the annual State of the Nation Address, delivered by President Duterte on July 22, amid growing fears for the future of democracy and rule of law in the Philippines. Leading thousands of workers on the street, Elmer Labog, KMU chairperson, told the crowd:

“Three years under Duterte, workers’ wages are pegged far below living standards, contractualisation remains rampart, and unemployment is still one of the worst in Asia. If Duterte can’t do anything about it, then he must go.”

Earlier this month a group of KMU striking workers took their concerns to the Ministry of Labour to demand action.

In Manila, striking workers of the detergent company Champion and the multinational banana corporation Sumifru, both on strike due to unfair labour practices, held a protest action at the Department of Labour and Employment to present the true state of Filipino workers under three years of the Duterte administration.

The Champion and Sumifru workers’ unions are protesting the illegal termination of union members, the use of sham contracting, and unsafe working conditions.

“Instead of regularisation, Duterte’s failed promise led to mass termination of contractual workers. Workers have exhausted all legal processes to assert their status as regulars, yet the inhumane and anti-worker practice of contractualisation remains.” said Labog.

Exposing the “true state of workers under Duterte”

The striking Champion workers had gone through the proper legal channels, with an inspection of the company finding that the company was guilty of sham-contracting. But the Department of Labour and Employment intervened to reverse the results. Then, when the workers legally formed a union, the Champion management engaged in union-busting and fired the union members.

Before the Champion and Sumifru protests, Labog told the media:

“The workers are here to show the true state of labour under Duterte. Three years into his presidency, Duterte has not only failed to fulfil his promise to workers to end contractualisation, he has failed to raise wages or protect workers from unsafe working conditions”

Defend the right to dignified work

Everybody deserves a secure job and fair treatment at work.

Whether it’s in Australia or in the Philippines, big corporations shouldn’t force people into unsafe and precarious work just to make ends meet.

Join the global justice organisation of the Australian union movement and help Filipino workers defend the right to dignified work.