Widespread protests intensify vs short-term contractualization in the Philippines 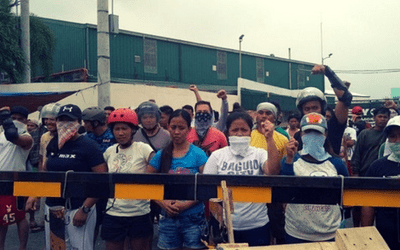 Under President Duterte, thousands of contractual workers have been illegally terminated. Instead of enforcing his own Executive Order to end sham contracts in the Philippines, he ignores it and sides with management, ordering police to disperse legitimate protests instead of implement rulings issued by the Department of Labor and Employment (DOLE). This has led to a surge in strikes, pickets and other labour protests against big-name employers. Here are some of the protests currently underway in the Philippines.

There has been a surge in strikes and pickets across the KMU’s unions and contract workers who support the campaign. Read more about some of the key struggles below.

A “Boycott NutriAsia” campaign has gained traction in social media, while contractual workers of the condiment giant maintain their picket line in Marilao despite a violent dispersal attempt on June 14. Four workers were arrested and dozens more were injured as local police claimed to be implementing a temporary restraining order (TRO) issued by a Bulacan court against the picket protest.

NutriAsia’s contractual workers set up their picket line on June 2, after management fired around 50 workers, including union leaders, and refused to implement a February 23 DOLE ruling which ordered the company to regularize 80 workers who were employed through an illegal LOC scheme. Workers also complained of unauthorized salary deductions and unsafe working conditions, reporting that NutriAsia failed to comply with laws governing occupational safety and health (OSH) standards.

Led by the Liga ng mga Manggagawa sa Honda Parts (LMHP), employees of Honda Parts Manufacturing Corp. are protesting against the illegal dismissal of 38 contractual workers in June. The termination came after a DOLE inspection which found that two of Honda’s service contracting agencies were engaged in illegal contractualization schemes. Company management also refused to comply with a DOLE order for the regularization of over 200 contractual workers. Honda workers claim that the company also colluded with a pro-management union, Obrero Pilipino, to circumvent the regularization order and orchestrate the illegal termination of workers who led the fight for the implementation of the DOLE compliance order.

Along with other contractual workers in Laguna Technopark, Honda workers continue to protest illegal contractualization schemes and lend their support to other protesting workers in the region. 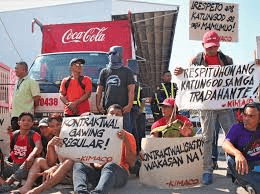 Coca-cola workers are engaging in various protest actions in CCFPI plants across the Philippines, as the company enacts a country-wide, long-term plan to scale down the number of its regular employees and replace them permanently with contractual workers. Hundreds have already been terminated, and at least 600 more are slated for termination. CCFPI defends these moves as “restructuring” and “cost-cutting measures,” even citing as an excuse the TRAIN law and the impact of the law’s “sugar tax” on company profits. However, in December 2017 the company reported total revenues of over US$10.3 billion; more than enough to absorb the costs of regularizing its contractual workers, especially those who have been with Coca-Cola for decades of service.

In Coca-Cola’s Santa Rosa plant, a yearlong picket culminated in a strike last March. The strike ended after CCFPA agreed to reinstate and regularize 128 illegally dismissed contractual workers. However, in Coca-Cola plants in Imus and Davao, protests are still ongoing. In the Imus plant, workers are fighting against union-busting and arbitrary dismissals. In Davao — where Martial Law has yet to be lifted — workers went on strike after the arbitrary dismissal of 140 contractuals. They were violently dispersed, leading to the arrest of 10 workers. Davao City mayor Sara Duterte-Carpio sided with CCFPI management, threatening the protesters with criminal charges.

PLDT contractual workers, led by members of the PLDT Organization of Workers and Employees for Rights (POWER), mounted a picket line at the main company office along España. They later joined workers of other regions in Mendiola in setting-up a protest camp alongside other contractual workers. They  also joined the State of the Nation Address protest yesterday July 23.

On June 30, the Philippine Long Distance Telephone (PLDT) company terminated its service contracts with various illegal labor-only contracting (LoC) agencies. Since then, over 12,000 contractual workers have lost their jobs. The telecommunications giant has openly flouted a DOLE ruling that ordered them to regularize over 7,300 workers from across 38 service contractors. Though the DOLE order is final and executory, PLDT instead fired the employees covered by the order, along with 5,000 more contractuals who were not included in the DOLE list. On July 11, DOLE released a clarificatory order, stating that PLDT had no legal right to add any conditions to the ordered regularization of its workers. However, PLDT contractuals reported that they have been offered payoffs, or asked to reapply as “new hires,” instead of being immediately absorbed by PLDT as mandated by law.

According to their workers, Core-Asia — a supplier for over 100 other companies in the Philippines — engages in various illegal and anti-labor practices. Of its 100+ workforce, only 58 are regular, with 17 agencies also providing contractual workers under illegal LOC schemes. Many of them are paid below minimum wage, and work 10-15 hour days through forced overtime. Management has also threatened a July 19 closure of the plant, which would lead to the termination of all workers.

PLMC-ANGLO-KMU asserts that this looming closure is merely a union-busting scheme, intended to circumvent laws protecting labor rights while allowing the company to resume operations with a new batch of contractual workers. These conditions pushed the Core-Asia workers to launch their strike on last July 2. 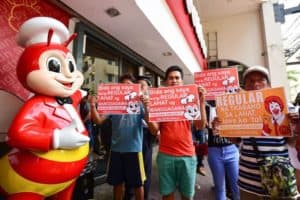 Illegally dismissed Jollibee contractual workers, led by the Samahan ng Manggagawa sa Jollibee Foods Corporation (SMJFC), have held a series of protest actions over the past two months. They have an ongoing picket protest at the main commissary and warehouse of Jollibee in Parañaque.

The fast food giant, which has long been notorious for contractualization, recently severed its ties with two contracting agencies after a DOLE inspection found them guilty of violating labor laws against LOC schemes. Jollibee’s termination of their service contractors also led to the illegal termination of hundreds of Jollibee employees, many of whom had been in loyal service for years. This mass lay-off was in direct violation of a February 2018 DOLE ruling that ordered JFC to regularize over 6,400 workers. Moreover, according to SMJFC, the DOLE order is actually a massive understatement of the rampant contractualization in JFC branches, with tens of thousands of contractual workers all deserving of regularization under the law.

Illegally terminated workers of Middleby continue to hold regular protest actions outside Laguna Technopark, Binan, where the factory of the US-owned corporation (a manufacturer of large-scale commercial cooking equipment) is located. Led by Samahan ng mga Manggagawang Kontraktwal sa Middleby-LIGA, the workers went on sit-down strike on May 10 (only ten days after the signing of Duterte’s much-touted EO 51).

The strike was a response to a threat by company management to illegally terminate 131 contractual workers, in direct violation of an April 24 DOLE compliance order for regularization.

Throughout the two months of their strike, the protesters were continually harassed. They reported a “food blockade,” with Middleby management refusing to give them access to food and water brought to them by supporters. The management also harassed the families of the workers on strike. In early July, a brutal dispersal led to seven arrests and dozens of injuries, as the PNP colluded with Middleby management to forcibly remove the workers on sit-down strike from the company premises. Despite this development, Middleby workers continue to push their case with DOLE, launch protest actions against Middleby, and support the protests of other contractual workers in the region.

The workers of food manufacturer Monde Nissin, led by Monde Nissin Labor Association-LIGA (MNLA-LIGA), have an ongoing picket line at the company’s plant in Santa Rosa, Laguna. They are protesting Monde Nissin’s rampant contractualization via illegal LOC schemes, as well as the dismissal of three contractual workers in May and 15 more in June. Monde Nissin employees also warned of the pending termination of a hundred more workers in the coming weeks.

The conflict between Monde Nissin management and workers has been unresolved since 2017, when MNLA-LIGA pushed for a DOLE inspection of the plant. The company repeatedly avoided a genuine DOLE inspection. First, they rescheduled; second, they let the DOLE inspectors inside but barred contractuals from communicating with them (via shift changes, handpicking workers for interviews, and preventive measures from plant security). The cherry-picked results led MNLA to push for a re-inspection, which was granted. However, this time Monde Nissin management simply refused to let the latest inspectors enter the plant. With the case pending, and another batch of workers facing illegal dismissal through terminated service contract agreements, the workers of Monde Nissin continue to maintain their protest camp and fight for regularization.

There are around 280 contractual workers in Slord’s 600+ workforce, many of whom have been employed by the company for decades. Despite their length of service, they were barred from organizing, paid below minimum wage, denied any benefits, and even forced to pay for their own safety equipment such as boots, aprons, and masks. The workers who joined the ongoing picket protest are calling for the return of the 44 fired workers, the regularization of all the company’s contractual workers, and compliance with labor laws on wages and OSH standards.

Read about the work of KMU: Training workplace union organisers and the fight to end sham contracting in the Philippines