Five things you should know about garment workers in Myanmar

The garment sector has emerged as a growing industry in Myanmar. Low wages provide a strong incentive for multi-national companies to take advantage and exploit workers.

Here are five things you should know about garment workers in Myanmar. 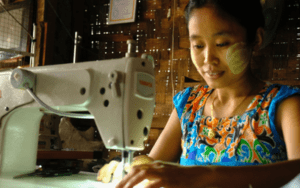 1. The garment sector is booming but garment workers are yet to benefit

The garment sector has emerged as a growing industry in Myanmar. With manufacturing costs comparable to neighbouring Bangladesh and three times lower than in China, there is one new garment factory opening up each week. In 2017, footwear and garment exports totalled US$3 billion, a 25 percent increase from 2016. The garment sector absorbs around 25 percent of the Foreign Direct Investment (FDI) and by 2020, investments in the garment sector are set to increase by US$10 billion with the number of workers expected to reach 1.5million. The bulk of workers are low-skilled and open to exploitation. Unions in Myanmar are working hard to make up for lost time with unions only being legalised in 2012.

2. Harassment is routine, pregnancy tests are common and toilet breaks are timed

Of the 738,000 workers in the garment sector, the majority are young women.  The International Labour Organization (ILO) is soon to release a gender equality assessment of foreign-owned garment factories that found that women are routinely harassed, including groping or being subjected to unsolicited sexual comments from other workers, supervisors or their peers. Many workers have reported being tested for pregnancy at the recruitment stage as factory owners were worried about the production line being broken and did not want to pay workers’ 98-day maternity leave.

Last year, the Burmese Women’s Union exposed the shameful labour practices such as limiting garment workers to two bathroom breaks per shift and allocating a time for toilet breaks. Women workers who go over the allocated time are threatened with wage cuts.

3. A new minimum wage has been approved – but at what cost?

Earlier this year, a 33% increase to Myanmar’s minimum wage for workers in the garment sector was announced. This raises the minimum wage of 3,600 kyats (US$2.65) per day introduced in September 2015 to 4,800 kyats (US$3.50) per day. Yet it is one thing to legislate a new minimum wage and another to implement it.

Action Labor Rights (ALR) has been advocating and negotiating for the enforcement of the new minimum wage. In early May 2018, ALR assisted unions working with garment workers at two factories supplying NEXT, TopShop, and Muji to settle a dispute resulting in an agreement to enforce the new minimum wage.

While the new minimum wage is good news, there are concerns that it may come at the cost of existing benefits. Some workers are worried their target bonuses, travel allowances or long-term employment incentives will be cut by factory owners. ALR agrees that the possible levelling out of existing benefits with the introduction of the new minimum wage is a real concern for workers. This was indeed the case in 2015 when a minimum wage was introduced for the first time. Some more experienced workers had their wages reduced and others had their benefits cut, leaving workers feeling cheated.

4. Major factories have started to outsource production to home-based workers

Myanmar’s low wages serve as a competitive advantage in attracting Foreign Direct Investment (FDI) for the emerging garment industry, especially since the bulk of workers are low skilled and open for further exploitation.

The low skilled “Cut-Make-Pack” or “Ready Made Garment” production system creates a layering of the production chain and encourages the emergence of informal businesses. More and more factories are dispersing their production sites to home-based workers to generate more profit by avoiding taxes and reducing labour costs. Multi-national companies are taking advantage of this and exploiting garment workers even further.

The process of outsourcing production tasks to home-based workers and/or community-based manufacturing sites puts these informal workers in a vulnerable position. Home-based workers say that they don’t feel like they are even recognised as workers.

“Working as a home-based worker can be worse than working at a factory. We are often not recognised as workers. We do not get sufficient protection, benefits and skill training even though our working hours can be longer than factory workers,” Thawdar Myint

5. Home-based garment workers are invisible in the supply chain (but we’re trying to make them visible!)

The rise of home-based workers is a growing concern, especially since little research has been done into the working conditions. To shed some light on informal garment sector workers, our partner organisations Action Labor Rights (ALR) and Labour Rights Defenders & Promoters (LRDP) recently conducted a survey on working conditions in the Ready Made Garment (RMG) sector. The survey was conducted in 9 townships engaging 153 workers from 78 home-based workshops and the initial findings show:

Union Aid Abroad – APHEDA is supporting the work of LRDP and ALR as they continue to participatory action research to reach out to workers in the informal garment sector and help raise the political visibility of home-based workers. ALR and LRDP are looking at new ways to organise and bargain including the formation of community-based unions or existing unions integrating informal workers into their membership base.

Want to know more about worker’s rights in Myanmar and the struggle of union members fighting back against the system? Watch ‘They Only Listen When We Are United’ – a documentary produced by APHEDA partner organisation, Karen News: