Frustrations continue over listing of Chrysotile Asbestos at Rotterdam Convention 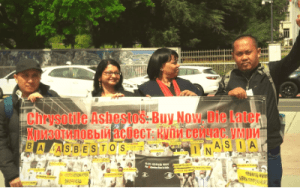 Union Aid Abroad – APHEDA’s Asbestos. Not here. Not anywhere. campaign aims to achieve asbestos bans in Asia. APHEDA works with asbestos ban networks, unions and civil society to raise the profile of the campaign to ban asbestos and change the rules at the Rotterdam Convention so asbestos producing countries can’t continue to block the listing of chrysotile asbestos as a hazardous chemical. Here’s a wrap up of the Conference of Parties to the Rotterdam Convention (CoP9) and an overview as to why a successful challenge to the consensus doesn’t stop ongoing frustrations over the listing of chrysotile asbestos.

The Rotterdam Convention Conference of Parties (COP9) meeting in Geneva, Switzerland in early May saw unprecedented challenges to the business-as-usual consensus approach to decisions with the first ever vote at a Rotterdam Convention meeting. The historic vote was to create compliance mechanisms for countries to provide prior informed consent before exporting hazardous chemicals. The vote came after several countries opposed the long-needed reform.

The Rotterdam Convention is an agreement between countries (now 161 countries) around the world to regulate dangerous chemicals and pesticides in order to protect people and the environment. If a chemical is listed on Annex III of the convention then it can only be traded with prior informed consent from the importing country. There was a push by a coalition of states from Africa who are frustrated that chrysotile asbestos is still being blocked from listing. This coalition failed to change the rules at Rotterdam to allow a 75% majority of states to successfully list Chrysotile Asbestos on Annex III after attempts at consensus have been exhausted.

The Asian Ban Asbestos Network (ABAN) presented a delegation from India, Indonesia, Hong Kong, Australia and Switzerland. This included Union Aid Abroad – APHEDA and our Indonesian partners. They slammed the repeated failure of the meeting to list chrysotile asbestos. The delegation of six activists represented the 222,000 people who die every year from asbestos diseases, and campaigned loudly for reform directly to the conference.

A public vigil to remember those who have died from asbestos exposure was held. The delegation lobbied other delegates, provided a direct challenge to the chrysotile lobby lies and misinformation, and held a showing of a new documentary film ‘Breathless’. The delegation presented to the conference an open letter from trade unions, victims groups and civil society organisations around the world, including from the International Trade Union Confederation (ITUC) representing 207 million workers, demanding reform and action on listing chrysotile asbestos.

During the Conference, activists held a series of protests and awareness raising events at the COP site that gathered attention from the media and attendees.

Asbestos lobby groups were also present and had a stall at next to the ABAN activists. The Russian pro-asbestos delegation even held a tiny counter-demonstration holding signs reading ‘Chrysotile Forever’ and ‘No Chrysotile Ban’ 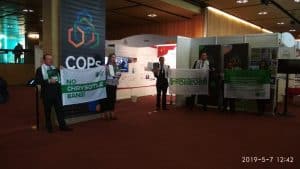 Amongst the ABAN activists was Subono, Secretary of Indonesia’s Serbuk union and previously an asbestos factory worker. He made a blunt statement on the lack of progress towards listing Chrysotile Asbestos in Annex III.

I have worked 14 years in a factory using chrysotile asbestos.  I am now suffering from an asbestos-related disease from that exposure. I am here representing other friends who are victims of asbestos in Indonesia and in the world. We are so angry with the countries blocking the listing at this Convention.  We condemn this veto. How can the financial interests of just a few Parties block the desires of the many to protect workers like me, from toxic exposures?’ Read Subono’s full statement…

Become a Global Justice Partner today and contribute to Union Aid Abroad – APHEDA’s Asbestos. Not here. Not anywhere. campaign. Yes, sign me up!